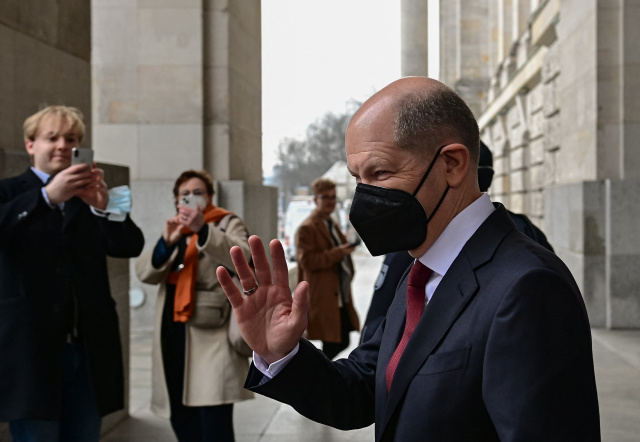 German Chancellor Olaf Scholz reacts as he leaves the Bundestag (lower house of parliament) in Berlin on December 8, 2021, after his election as Chancellor. Members of the parliament elected Olaf Scholz, bringing the curtain down on Angela Merkel's 16-year reign, ushering in a new political era with the centre-left in charge. Together with the Greens and the liberal Free Democrats, Scholz's SPD managed in a far shorter time than expected to forge a coalition that aspires to make Germany greener and fairer. (Tobias SCHWARZ / AFP)

(AFP) - The German parliament elected Olaf Scholz as chancellor on Wednesday, turning the page on 16 years with Angela Merkel at the helm as a new centre-left-led coalition takes the wheel of Europe's top economy.

Scholz, who won 395 of the 707 votes cast in the Bundestag lower house, has pledged broad "continuity" with the popular Merkel while making Germany greener and fairer.

Asked by parliament speaker Baerbel Bas whether he accepted the election, a beaming Scholz nodded "yes" and then received bouquets of flowers from MPs congratulating him.

Scholz was then whisked by motorcade to Berlin's Bellevue Palace to be officially named Germany's ninth post-war chancellor by President Frank-Walter Steinmeier before his swearing-in back at the Reichstag parliament building at 1100 GMT.

The finance minister under Merkel led his Social Democrats to victory in the September 26 election -- an outcome considered unthinkable at the start of the year given the party's then festering divisions and anaemic support.

Scholz, 63, who turned emulating Merkel in style and substance into a winning strategy, has now cobbled together Germany's first national "traffic light" coalition with the ecologist Greens and the liberal Free Democrats, nicknamed after the parties' colours.

"We have a chance for a new beginning for Germany," Scholz told his party at the weekend as it gave its blessing to the coalition agreement with 99-percent support.

French President Emmanuel Macron congratulated Scholz, pledging "we will write the next chapter together" while EU chief Ursula von der Leyen said she looked forward to working together for a "strong Europe".

Germany's incoming foreign minister, Annalena Baerbock, has pledged a tougher line with authoritarian states such as Russia and China after the business-driven pragmatism of the Merkel years.

Greens co-leader Baerbock is one of eight women in Germany's first gender-balanced cabinet.

"That corresponds to the society we live in -- half of the power belongs to women," Scholz, who describes himself as a "feminist", said this week.

Scholz and his team promise stability just as France braces for a bitterly fought presidential election next year and Europe grapples with the enduring aftershocks of Brexit.

However, a vicious fourth Covid wave has already put the incoming coalition to the test.

"We have to make a fresh start while facing down the corona pandemic -- those are the circumstances the new government is up against," Scholz told reporters Tuesday.

More than 103,000 people have died with coronavirus in Germany while new infections have surged since the weather turned cold, filling intensive care units to breaking point.

Scholz has thrown his weight behind making jabs mandatory to get the pandemic under control, as Austria has done, as experts say the worst is still to come for the country's struggling clinics.

Merkel, 67, Germany's first woman chancellor, is retiring from politics after four consecutive terms, the first post-war leader to step aside of her own accord.

Macron tweeted his gratitude to the outgoing leader.

"Thank you, dear Angela, for never forgetting the lessons of history, for having done so much for us, with us, to move Europe forward," he said.

She leaves big shoes to fill, with large majorities of Germans approving of her leadership, even if her own party, the conservative Christian Democrats, often bridled against her moderate course.

Despite being from a rival party, Scholz tapped into that well of popular support in his bid to succeed her.

Her successor has, however, pledged to tackle the widening gap between rich and poor under Merkel.

The independent Centre for European Economic Research (ZEW) said in an analysis of the coalition pact that lower-income Germans and parents stood to gain the most from its policy roadmap.

Meanwhile, Greens supporters are banking on billions flowing toward climate protection and renewable energy, even as the government pledges to return to a no-new-debt rule by 2023.

General » Be a reporter: Write and send your article » Subscribe for news alert
Tags: Germany, politics