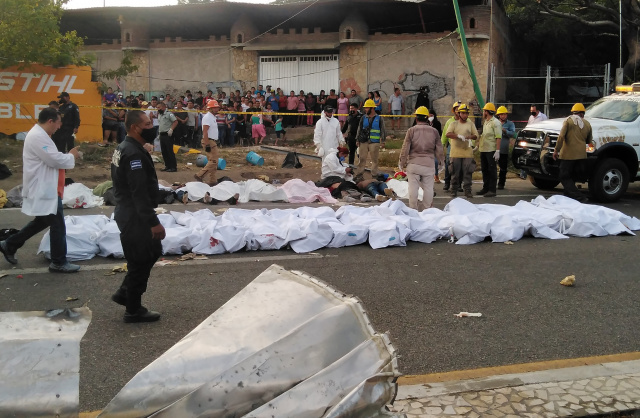 View of the bodies of migrants who died in an accident lying on the pavement in Tuxtla Gutierrez, state of Chiapas, Mexico, on December 9, 2021. At least 49 migrants died Thursday after a trailer in which they were traveling clandestinely crashed into a retaining wall and overturned on a highway in the southern Mexican state of Chiapas, state prosecutors said. (SERGIO HERNANDEZ / AFP)

(AFP) - At least 53 migrants crammed into a truck traveling at high speed were killed Thursday in Mexico after the vehicle overturned in the southern state of Chiapas, a major transit point for those trying to reach the United States.

Thousands of people attempt the long and hugely dangerous journey, often seeking a life free of violence and poverty in their home nations in South America.

It is unclear how many people were traveling in the truck but at least 58 were injured, three seriously, according to a preliminary report from the prosecutor's office in Chiapas, bordering Guatemala.

"It was horrible to hear the wailing. I just thought about helping," 18-year-old Sabina Lopez, who lives near the scene of the accident, told AFP.

Luis Manuel Garcia, from the Civil Protection director for Chiapas -- which will take over the investigation into the accident -- said most of the travelers were from Guatemala.

The driver, who fled the scene, appeared to have been speeding when he lost control of the vehicle on the highway connecting Chiapa de Corzo city with state capital Tuxtla Gutierrez, officials said.

Local state governor Rutilio Escandon said that "law enforcement will determine who is responsible," adding that those hurt would be treated promptly.

At the roadside AFP saw rows of bodies covered with white sheets as rescue workers, ambulances and police officials swarmed over the scene.

Lopez, who lives in the popular El Refugio neighborhood nearby, told AFP she saw a man pleading with his wounded companion.

"Don't go to sleep, don't close your eyes," she recalled him saying. "Remember what you promised your mother! Hold on."

Another resident Isaias Diaz -- who arrived 15 minutes after the accident -- described a "terrible" scene, with "a lot of people lying around, some of them were already dead."

"The crying, the pain, the desperation. It was a very ugly atmosphere," he said.

Guatemalan President Alejandro Giammattei also pledged to provide any of his countrymen with consular assistance, including efforts to repatriate people.

Moving undocumented migrants hidden in trucks is the most common method used by human traffickers operating along the border from Guatemala into Mexico, where they then head north to the US border.

Others have opted to join the so-called caravans, in which people travel much of the long journey on foot, often battered by extreme weather in parts of Mexico, -- not to mention the threat of drug cartels and other organized crime syndicates.

The Mexican branch of the UN refugee agency (UNHCR) has called for "alternatives" and legal pathways for migration in order to "avoid tragedies like this one."

And Mexican immigration authorities said the survivors could be offered temporary permits to remain in the country for "humanitarian reasons" along with food and housing aid.

The flow of undocumented migrants has grown since United States President Joe Biden came to office with a promise to scrap the hardline border policies of his predecessor Donald Trump.

More than 190,000 migrants were detected by Mexican authorities between January and September, three times more than in 2020. Some 74,300 have been deported.

General » Be a reporter: Write and send your article » Subscribe for news alert
Tags: Mexico, accident

Plane with 22 on board missing in Nepal