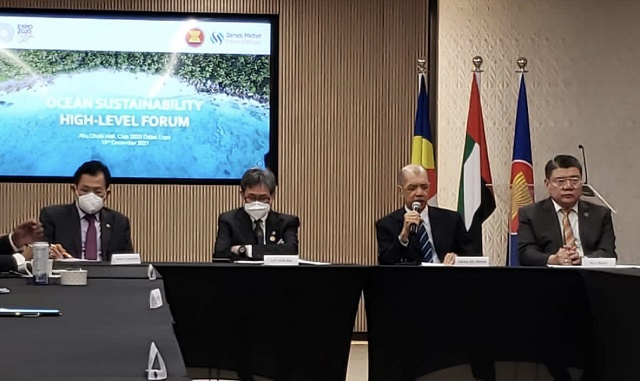 (Seychelles News Agency) - As an island state and a pioneer of the Blue Economy, Seychelles can share its model with other small islands in the Association of South East Asian Nations (ASEAN), former President James Michel told members of the group.

Michel, the executive chairman of the James Michel Foundation, made the statement at the Ocean Sustainability High Level Forum organised by ASEAN on the sidelines of Expo 2020 in Dubai, on Friday.

"Just like the Western Indian Ocean, your region has very rich and vast marine space. Holding approximately 33.33 percent of the world's coastal and marine habitats, it provides breeding grounds for countless oceanic species and supports the livelihoods of coastal communities. It is an economic powerhouse that awaits to be unleashed and the opportunities are simply endless. The business potential of the ocean can bring benefits to big and small states alike, not just islands," he said.

The former president shared the initiatives that Seychelles has taken especially the deal he brokered with the Paris Club and The Nature Conservancy known as the Debt-to-Adaptation Swap whereby repayment of an international debt of $21 million was cancelled in exchange for investment in the Blue Economy.

"Seychelles has already achieved 30 percent protection of its ocean space and has committed to do even more in the years to come. This is a major achievement. Through our collaboration, the Seychelles' model can be shared and adapted to convert the MPAs in ASEAN to become sources of finance to help the development of fishing communities, local tourism and conservation supported by capacity building to empower coastal communities to care for their waterfronts as their lifetime assets," he said.

Michel said that like Seychelles', the rich ecosystem of South East Asia is also the world's "most threatened" mostly due to climate change, pollution and over exploitation of resources.

"If not attended to urgently they will impact negatively on food security, tourism, fisheries, the economic opportunities we want to tap into and also global warming mitigation efforts. Conservation and restoration of marine and coastal biodiversity should therefore remain at the centre of all initiatives to unlock the development of a regenerative Blue Economy," he said.

Michel however recognised that a lot has been done by ASEAN member states to put the region as number one in the world for the richest biodiversity and protect marine ecosystems with strict environmental laws but more can be done.

ASEAN consists of 10 member states which are strategically located across five million square kilometers of maritime space between the Pacific and Indian Oceans.