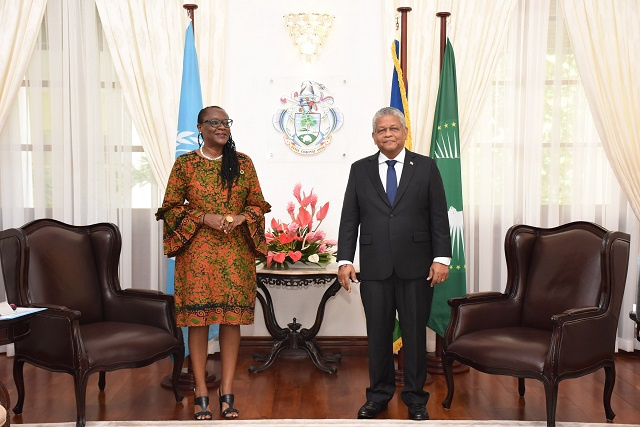 (Seychelles News Agency) - Seychelles will receive about $10 million from the United Nations Development Programme (UNDP) in the coming 18 months to improve its Blue Economy sector, the UNDP resident representative to the island nation said on Tuesday.

Amanda Serumaga paid a visit to President Wavel Ramkalawan at State House in Victoria, the culmination of a two-week mission in Seychelles.

"Over the past four years, we have managed to deliver on programmes worth about $16.5 million. We have also been able to mobilise new resources, so over the next year and a half we expect to have about $10 million and again it will be focused on the Blue Economy. We have just started a programme on coral restoration at Curieuse and in other locations. We are also continuing our work on places like Val Den D'or in terms of ecosystem-based adaptation," Serumaga told journalists.

During the visit to State House, Serumaga briefed Ramkalawan on the different programmes that the UNDP is implementing in Seychelles over the last four years and those for the next couple of years.

"We were very pleased to have a good and wide-ranging discussion especially around the results of COP26, some efforts towards public administration reform and also to talk about the environment and some of the initiatives the UNDP is working on," she said.

Throughout her mission to Seychelles, an archipelago in the western Indian Ocean, which Serumaga described as fruitful, the UNDP resident representative met with government officials, local associations and non-governmental organisations.

During the mission, the UNDP donated 50 laptop computers, a server, scanners and tablets to the executive officers at the Department of Foreign Affairs under the 'Facilitating Recovery through Digital Solutions (Covid 2.0)' programme.

In an article in the Seychelles Nation, Serumaga said that the contribution from UNDP is predicated on the foresight of the government of Seychelles to institute the calling of a digitalisation programme.

"In the context of COVID-19, we have all learned that we need to transcend and work in a new normal that we are going to find new ways of working which includes a paperless economy, and a paperless office. The aim of our support is really to help engender the new way of working that the government has prioritised, but also to become more efficient and effective as countries now have to compete even more greatly in terms of their ability to serve their people, and the communities that visit them," she said.

UNDP also made a donation of 98 laptop computers, 98 docking stations, and four scanners, to the Ministry of Finance, Economic Planning and Trade.