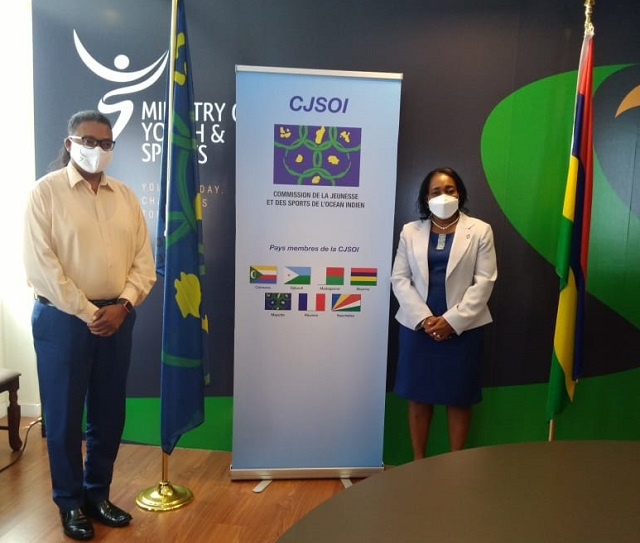 It was endorsed during a working mission to Mauritius from December 8-13. (Ministry for Youth, Sports and Family)

Seychelles' minister for Youth, Sports and Family, Marie Celine Zialor, who is the current president of the CJSOI, proposed the idea. It was endorsed during a working mission to Mauritius from December 8-13, where the secretariat of the CJSOI is based and where the 12th edition of the games is to be held in December 2022.

Zialor told SNA she and her counterpart in Mauritiius, Minister Stephan Toussaint, discussed the Blue Economy concept together.

"Blue economy is crucial and important for both island nations and its huge potentials must be understood by young people of our islands," said Zialor. The two ministers agreed that as island nations the Blue Economy should be a strong component of the 12th edition of the games.

Training and conference will be part of activities earmarked for the youth component of the games which brings together young people aged 14 to 17.

The academic component will consist of leadership training, exchanges involving young professionals within the sector as well as conferences on opportunities and potentials for professional development, careers and entrepreneurship amongst other topics within the blue economy.

These will be held during the games or leading up to the games, as the modality is yet to be decided.

The CJSOI Games which are held every two years were introduced in 1994 by the Ministerial Committee of the Commission de la Jeunesse et des Sports de l'Ocean Indien. Its objectives are to promote friendship ties between young people from member States and foster regional cooperation, sporting culture and development of young people.

The member states of CJSOI include the Comoros, Djibouti, Madagascar, Mauritius, Mayotte, Reunion Island and Seychelles, a group of 115 islands in the western Indian Ocean.

Zialor said that young people being future leaders should be included in discussions on the Blue Economy, something she said is needed as Indian Ocean nations can be the leaders in this sector, adding that both islands have huge exclusive economic zones (EEZ).

Toussaint on his part welcomed what he described as an excellent proposition as he said the two nations have big economic exclusive zones, adding that already Seychelles and Mauritius have joint management of the Mascarene Plateau.

"The potential for cooperation is there, especially when we share a common maritime area. We are going to set up a structure to work on this project," added Toussaint.

The Mauritian Minister explained that it is time for young people to move away from traditional fields for career development and see what exists for professions within the Blue Economy.

The two ministers also talked about other ways to renew and increase areas of cooperation in sports - especially water sports - but also in other fields that affect youth such as youth development in entrepreneurship, health and the Blue Economy.

Sport » Be a reporter: Write and send your article » Subscribe for news alert
Tags: CJSOI