Internet prices to drop in 2022 in Seychelles, President says in final address of year 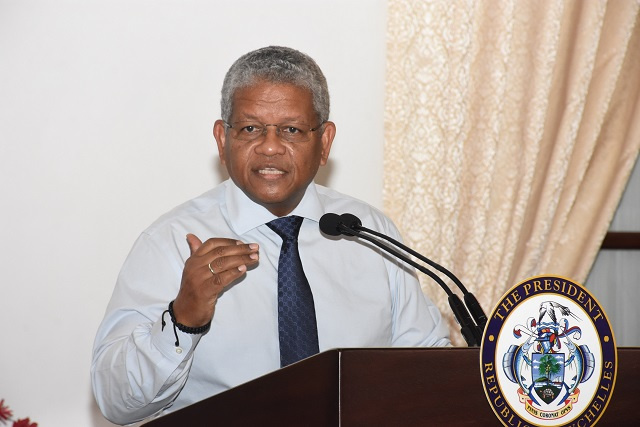 Ramkalawan made his final live news conference of the year on Tuesday.(Seychelles Nation)

(Seychelles News Agency) - More effective and efficient public services are one of the main priorities of the Seychelles' government next year, President Wavel Ramkalawan said on Tuesday in his final live news conference of the year.

The President also announced that he expects the price of internet servicers to drop in Seychelles at the beginning of 2022 following negotiations by the Vice President.

"There are lots of things that need to be done to make Seychelles move forward, but what I would like during the first three months of next year is for us to see the public service heading in a better direction," said Ramkalawan.

The President said tackling the issue of then cost of living has been among his main priorities upon taking the presidency.

Ramkalawan acknowledged that rising fuel costs and a global shortage of shipping containers have together alongside the rise in global food prices contributed to a rise in the cost of living.

The Seychelles Trading Company (STC) has for many years been tasked with making basic commodities affordable in the island nation which will help reduce the cost of living.

"From the various plans that STC have put in place, including closing some of its retail outlets, along with introducing and STC recommended retail price (RRP), has enabled it to sell commodities at a lower price and I am satisfied with the work they are doing and the government will continue to support them," added Ramkalawan.

The cost of the internet was also raised in the press conference and the president revealed that there are ongoing plans to reduce the price of internet packages in Seychelles.

It was pointed out that with the COVID-19 pandemic, internet is not a luxury but a necessity as more people need access to work online.

"The Vice President, who is responsible for the portfolio of information technology, is in discussion with the two main internet service providers in Seychelles. Airtel and Cable and Wireless have agreed to reduce their prices by January 1, 2022," he said.

No details on pricing plans were provided.

On his visit to the United Arab Emirates, Ramkalawan explained that discussions were done on the UAE's continued investments in Seychelles, an archipelago in the western Indian Ocean.

He spoke about various capital projects that are being done in Seychelles which include the extensions of the MAIA resort and AVANI, along with the hotel project at Anse La Mouche. Ramkalawan said that UAE feels that Seychelles continues to provide secure investment opportunities.

Ramkalawan also spoke of the La Digue hospital which has been funded by UAE and said that construction is due to start this month. He also talked about the while also mentioned the possibility of converting the Palace at La Misere, belonging to UAE royalty into a hotel.

With the new omicron variant of the COVID-19 virus dominating global headlines, the president was asked about the authorities' preparation in case the variant is detected in Seychelles

Ramkalawan again emphasised the importance of being vaccinated and urged the population to take advantage of the Pfizer vaccines due to arrive in the country soon.

"At any point now, Seychelles will get another 40,000 doses of the Pfizer vaccines and we are encouraging people to take the third doses and those who have not been vaccinated at all can also take the opportunity to get the first and second doses of the vaccine," he said.

He also added that while there have been talks of making vaccines mandatory, at the moment that is not applicable for Seychelles. Ramkalawan has called on people who do not want to be vaccinated to not sway others to do the same, but rather let it be each individual's personal decision.