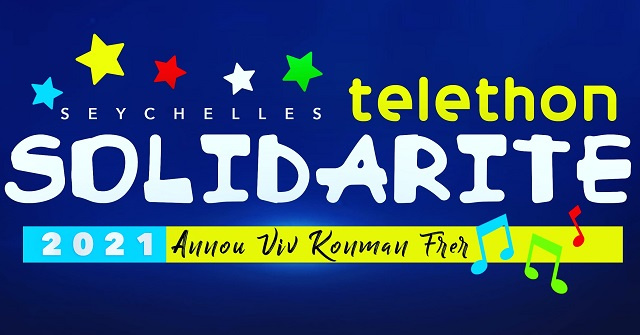 The telethon will be aired on Telesesel, SBC 2 or SBC 3, Youtube and Radiosesel.com on Saturday December 18 from 2 pm to 6 pm local time. (Gilles Lionnet)

(Seychelles News Agency) - Around 100 performing artists will participate in Seychelles' first telethon on December 18 to raise funds for the children of Seychelles and Madagascar and the artists themselves.

Gilles Lionnet, who is a member of Telethon's organising committee, told the press on Wednesday that already SCR 400,000 has been raised out of which 80 percent will go to the artists and the remaining will towards the logistics of putting together the show.

A telethon is a long television programme organised to raise funds, especially for a charity.

Dubbed 'Telethon Solidarite', the event is being made a reality by Gilles Lionnet, a local singer and music manager, and Patrick Victor, the Ambassador for Culture, in collaboration with the National Arts Council (NAC), the Red Cross Society of Seychelles (RCSS) and the two local broadcasters – SBC and Telesesel.

Being held under the theme 'Annou Viv Konman Frer' (Let us Live Like Brothers), the telethon will be aired on Telesesel, SBC 2 or SBC 3, Youtube and Radiosesel.com on Saturday December 18 from 2 pm to 6 pm local time.

Lionnet said that different invitees will be giving short talks in between pre-recorded and live musical performances on the day. All the songs that will be performed are based around the spirit of sharing, hope for all, solidarity, and Creole joie de vie. A few Christmas songs will also be performed.

The two main aims of the event are to raise funds for local artists whose trade has been greatly affected by the global pandemic and for children in Seychelles and Madagascar.

Lionnet explained that the idea to have a telethon in Seychelles, an archipelago in the western Indian Ocean, came when he saw a BBC piece about children of Madagascar.

"On the same day, I listened to an open microphone on SBC where the problems that artists were going through during COVID-19 were being discussed and that was also the day I took the decision to approach our partners to organise the event," he said.

"We chose to do a musical performance with the aim to show solidarity towards artists and we managed to raise funds through businesses. Having established this platform, we went further to make it one that will allow us to raise funds for children. The way we are doing this, the whole community will be raising this fund for the children of Seychelles," continued Lionnet.

The Secretary General of the Red Cross Society of Seychelles, Marie-May Esparon, told SNA that the telethon is a great initiative.

"We tend to look at people who are being directly impacted by COVID-19, but there are some musicians who haven't performed even if there are tourists coming into the country. Some do not even know if or when they will perform next. In line with this, we are trying to provide a psycho-social support. The show is psychological support to the artists, where they are able to help each other and themselves so they have a better picture of what to do next," said Esparon.

During the period leading up to the event and during the event, the public will be able to contribute towards the other aim of the Telethon. People looking to donate only have to send an SMS with the word 'Telethon' to 9689 for Airtel clients. A person can send as many SMS as they want from one number, at a cost of SCR10 each.

ABSA Bank Seychelles will double up each text sent to a total of SCR50,000 and 80 percent of the fund raised will go towards the children of Seychelles and 20 percent to those in Madagascar.

Lionnet is planning another such event next year and said that the committee start working as of January 2022 as this will provide people with more time to donate.

"We hope that the telethon remains an annual activity through which each year we can identify a community project for children that we will be able to finance through the telethon. We expect that next time, all artists will be participating on a voluntary basis. We want the next event to be a regional one. I already have artists from Africa and Reunion who are ready to participate for free. I also feel that we need to be more selective rather than looking at the number of artists," he said.