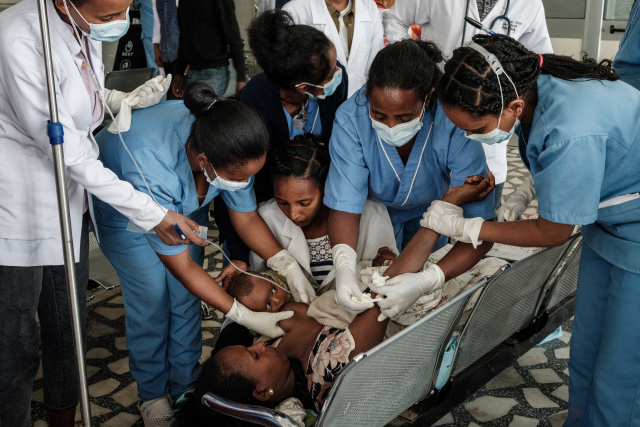 Following an emergency meeting, the 47-member UN Human Rights Council narrowly voted in favour of ordering the probe into a wide range of alleged violations by all sides in Ethiopia's 13-month conflict.

Ethiopia had strenuously objected to the special session and the resolution, with Ambassador Zenebe Kebede saying ahead of the vote that the council was "being used as an instrument of political pressure" and had been "hijacked by a neo-colonialist mentality".

The council decision came after the UN and dozens of countries took the floor to voice alarm at alleged atrocities, including mass killings and sexual violence, since the conflict erupted in Ethiopia's northern Tigray region in November 2020.

The conflict has left thousands dead, displaced more than two million people and pushed hundreds of thousands to the brink of famine, according to the UN.

This, she said, would have "major implications, not only for millions of people in Ethiopia, but also across the region".

The EU, which had requested Friday's special council session, warned that abuses were being committed "in an alarming scale".

"It is essential that perpetrators are held accountable in an independent, transparent and impartial manner," Lotte Knudsen, the EU ambassador in Geneva, said Friday.

The resolution called for the creation of "an international commission of human rights experts on Ethiopia", made up of three experts with a renewable one-year mandate.

They will be asked, among other things, to investigate alleged violations and "collect and preserve evidence, to identify those responsible, where possible... in support of ongoing and future accountability efforts".

They will build on the work already done by a joint investigation by the UN rights office and Ethiopia's Human Rights Commission (EHRC), the resolution said.

That investigation determined last month that possible war crimes and crimes against humanity had been committed by all sides during the conflict.

Al-Nashif said Friday the rights office had since continued "to receive credible reports of severe human rights violations and abuses by all parties".

She expressed particular concern about surging rights abuses after a nationwide state of emergency was declared on November 2, with mass arrests mainly of ethnic Tigrayans.

"While some of those arrested over the past six weeks have been released, we estimate that between 5,000 and 7,000 remain detained, including nine UN staff members," she said.

Ethiopia has said that it had cooperated with the joint investigation and had launched its own probe.

"We do not see any merit in this politically-motivated... resolution," Kebede said, insisting his country was "firmly committed to peace and human rights".

A number of nations came to Ethiopia's defence, saying that the country was being singled out by the council.

Cameroon's ambassador Salomon Eheth insisted on behalf of African countries that the requested investigation would be "counterproductive and susceptible to exacerbating tensions".

The Nobel Peace laureate declared victory over the TPLF but rebel fighters staged a shock comeback, recapturing most of Tigray and pushing into neighbouring Afar and Amhara.

General » Be a reporter: Write and send your article » Subscribe for news alert
Tags: Ethiopia, conflict