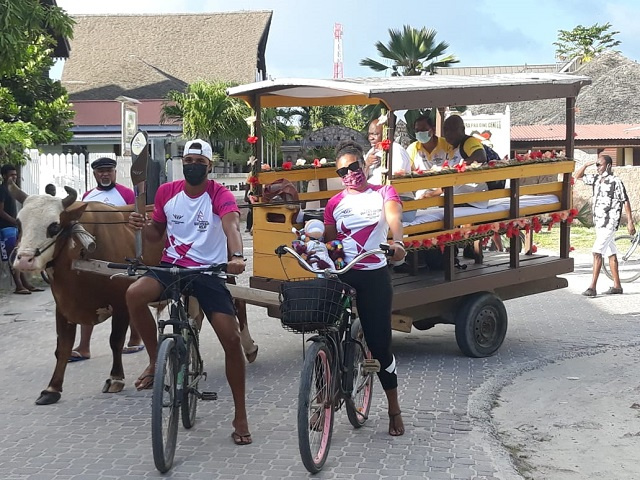 (Seychelles News Agency) - The Queen's Baton, which carries a message from Her Majesty Queen Elizabeth II as the Head of the Commonwealth, arrived in Seychelles on Wednesday.

After its arrival on Mahe, the main island, the Queen's Baton Relay made its way to Praslin, the second most populated island, in the early hours on Wednesday and passed through the Vallée De Mai and Cote D'Or before proceeding to La Digue in the late afternoon.

The Baton will return to Mahe on Thursday and the final leg of its journey in Seychelles will be on Friday where up to 40 hikers dressed in Santa costumes will hike on the popular Anse Major trail in the north of Mahe. Christmas carols will be sung on the beach after at around 10.30 am.

Santa hikers -- who will be setting off from the British High Commissioner's Residence with the Baton early in the morning -- will join families and friends at the trail's start at 9.30 am local time before continuing their hike to Anse Major beach.

The Queen's Baton Relay, which takes place before the Birmingham 2022 Commonwealth Games, began on October 7.

John Crabtree OBE, Chairman of Birmingham 2022, said during the launch of the Baton in October that "the Queen's Baton Relay will convey a message of hope and inspiration and will connect peoples from across the Commonwealth during the build-up to the Games and as we look to celebrate Her Majesty The Queen's Platinum Jubilee. This journey champions the miracle of difference, the individuality of humanity, yet speaks to a collective collaboration of a global community."

The Baton has been specially created by designers and technologists from the West Midlands in a unique collaboration that fuses science, technology, engineering and art.

With Birmingham 2022 making history by being the first major multi-sport event to award more medals to women than men, the strength and fortitude of women across the Commonwealth are celebrated throughout the design of the Baton.

The Queen's Baton will spend Christmas in Seychelles, an archipelago in the western Indian Ocean, before proceeding to Pakistan and welcoming the New Year in the Maldives.

The Commonwealth Games are expected to take place between July 28 and August 8 next year.