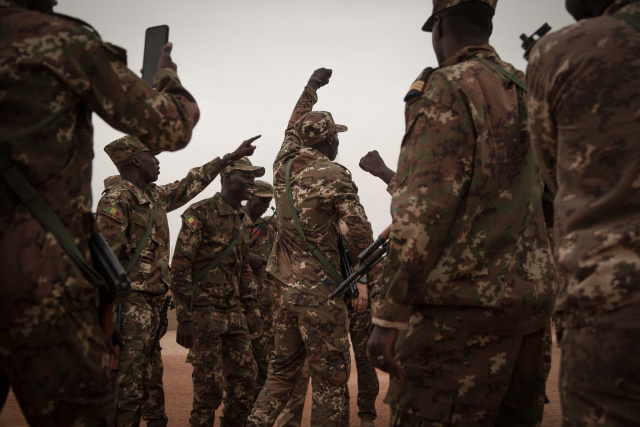 Malian soldiers dance after the handover ceremony of the Barkhane military base by the French army in Timbuktu, on December 14, 2021. (FLORENT VERGNES / AFP)

(AFP) - More than a dozen Western powers on Thursday expressed anger that Russian mercenaries working for the controversial Wagner group have started to deploy in Mali, accusing Moscow of providing material backing for the fighters.

The powers involved in the fight against a jihadist insurgency in Mali, including Canada, Germany, France and the UK, said they "firmly condemn the deployment of mercenary troops on Malian territory".

It was one of the first official acknowledgements by Western capitals that the deployment of fighters has begun in Mali after months of warnings to the Bamako government. But the statement did not say that the presence of the Wagner group in Mali would result in a pullout of foreign forces.

"This deployment can only further deteriorate the security situation in West Africa, lead to an aggravation of the human rights situation in Mali (and) threaten the agreement for peace and reconciliation in Mali," the 15 powers said.

They said they "deeply regret" the choice of the Malian authorities to use "already scarce public funds" to pay foreign mercenaries instead of supporting the Malian armed forces.

In a message to Moscow, the statement added: "We are aware of the involvement of the Russian Federation government in providing material support to the deployment of the Wagner group in Mali and call on Russia to revert to a responsible and constructive behaviour in the region."

A French government source who asked not to be named said intense activity had been noted as the deployment went ahead.

"We are seeing repeated air rotations with military transport planes belonging to the Russian army and installations at Bamako airport to allow the arrival of a significant number of mercenaries," said the source.

Also noted had been frequent visits by Wagner executives to Bamako and the activities by Russian geologists known for their association with Wagner, said the source.

Washington was not a signatory of the statement but US Secretary of State Antony Blinken last week warned Mali not to accept Wagner mercenaries, saying a deal would divert needed funds and further destabilise the country.

There has been growing concern over the situation in Mali under transitional leader Colonel Assimi Goita -- who took office in June after the country's second coup in less than a year -- and in particular over fears a commitment to hold elections in February is slipping.

The French source said the deployment of the Wagner troops was a "symptom" of the attitude of the current authorities towards transition and showed that, rather than paving the way for civilian rule, they wanted to "stay in place".

The Wagner Group has caused controversy through its involvement in Syria, Libya, the Central African Republic and the conflict in eastern Ukraine. EU ministers have agreed to draw up more sanctions against Wagner.

Russia denies any government link with the group but the unit has been linked to Yevgeny Prigozhin, a businessman close to President Vladimir Putin who has been hit by separate sanctions over meddling in the 2016 US election.

Prigozhin, who has been dubbed "Putin's chef" because of Kremlin catering contracts, denies any association with Wagner.

Mali is the epicentre of a jihadist insurgency that began in the north of the country in 2012 and spread three years later to neighbouring Niger and Burkina Faso.

French President Emmanuel Macron was due to raise concerns about the Wagner deployment on a visit to Mali this week to meet Goita for the first time.

However, his trip was scrapped with Paris blaming the Covid pandemic.

Paris has previously said any deployment of Wagner militia would be incompatible with the presence of French troops.

The statement from the 15 powers indicated they planned to remain engaged in Mali, saying "we will not give up our efforts to address the needs of the Malian population".