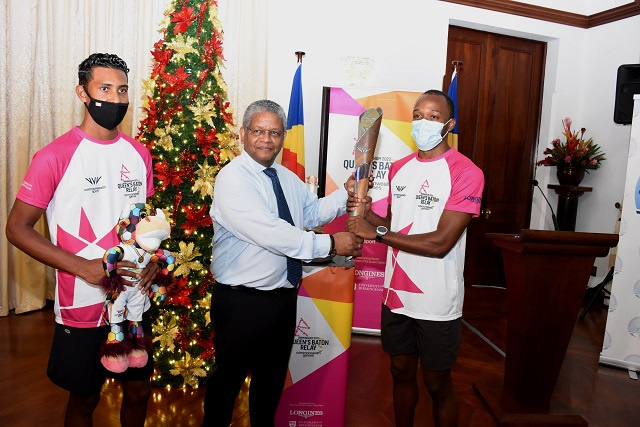 The Baton has gone around the country’s most populated islands of Praslin and La Digue upon its arrival December 22 before making its way to State House, carried by the Minister for sports, Marie-Celine Zialor.

The Minister passed the Baton to the Vice President, Ahmed Ahfif, who then presented it to the president.

"This is the first time, in the many times that the baton has been to Seychelles, that it is brought to State House. The reason why State House has decided to be involved in this event is to show our youth that here is also their home and we are going to support all the athletes who will be competing at the 2022 games,” said Ramkalawan.

The President took the opportunity to wish the best of luck to the Seychellois athletes who have qualified for the 2022 Commonwealth Games in Birmingham.

Ramkalawan that the hope is that the athletes can make Seychelles proud, by winning a medal at the Games, like boxer Jerry Legras, who was also present at the event, did.

Legras won a silver medal in the light welterweight category at the Commonwealth Games in 1998 in Malaysia. Three other Seychellois boxers have won medals at Commonwealth Games. Heavyweight boxer Roland Raforme won silver at the same Games; Rival Payet won bronze in the middleweight at the 1994 games in Canada and Keddy Agnes also won bronze in heavyweight in 2018 at Australia’s Gold Coast Games.

Two other Commonwealth medallists from Seychelles are weightlifter Janet Thelermont and long jumper Celine Laporte in 2006 in Melbourne.

At the moment, Seychelles has 22 confirmed spots at the Birmingham Commonwealth Games.

The baton left State House in the hands of athlete Dylan Sicobo and cyclist Johan Monthy. From there the Queen’s Baton headed to the British High Commissioner’s Residence at Bel Air and will be carried in a hike to the Anse Major beach. A special ceremony will take place at the beach which will include the singing of Christmas carols.

The Queen’s Baton will spend Christmas in Seychelles, an archipelago in the western Indian Ocean, the last African nation to receive the baton, and will head for Pakistan.

After visiting all 72 nations, the Queen’s Baton is expected to travel the length and breadth of England on the way to its final destination -- the Opening Ceremony of the Birmingham 2022 Commonwealth Games.

The Commonwealth Games is an international multi-sport event involving athletes from the Commonwealth of Nations. The event was first held in 1930, and, with the exception of 1942 and 1946, has taken place every four years since then.