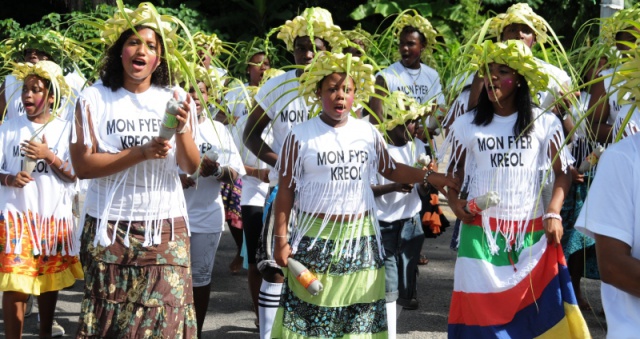 Four days remain for the annual Festival Kreol which will see the cultural, artistic, culinary and other manifestations depicting the Creole culture. (Seychelles Nation)

(Seychelles News Agency) - Following earlier celebrations of the Seychelles key historical origins the stage is now set for the biggest manifestation of all which will see the Indian Ocean archipelago’s population of around 90,000 people join together to celebrate their Creole identity.

Only four days remain before the start of the annual week-long celebration of the Seychelles Creole Culture.

2014 marks the 29th edition of the Festival Kreol (Creole Festival) that will be launched on Friday October 24 in the island nation’s capital of Victoria giving way to a week filled with musical entertainment, traditional folk dancing, arts exhibitions, food fairs and conferences showcasing Seychelles' Creole heritage.

The event will also be welcoming the participation of other creole nations like the neighbouring Indian Ocean islands of Mauritius, Reunion and even those further away from the Caribbean like the famous Zouk Band "Kassav" that will be returning to Seychelles after 23 years.

Kassav’s presence at this year’s Festival Kreol is aimed at giving a new impetus to the event which the archipelago’s Tourism and Culture Minister Alain St Ange says has grown a bit stale over the years, since it was first organised in 1981.

The group will be wowing the Seychellois public right after the opening ceremony with a free musical concert on Friday at ‘Stad Popiler’ in Victoria that will also feature popular local artists as well as others from neighbouring Mauritius and Reunion islands.

“We needed to revamp the festival…….It is for this reason, that this year we are giving it a new élan by bringing in such highly popular Creole groups like “Kassav" to re-launch the event. We need to mark this year’s festival and make it a stepping stone for the Festival Kreol 2015, which will be a milestone for our country as we shall be celebrating the 30th edition of the annual festival," St Ange told journalists during a press conference this morning while unveiling the various activities that will be taking place.

Kassav, a 22 member group of musicians, singers and dancers will also be staging their own show on Saturday with tickets selling at $15. The group star singers Jocelyne Beroad and Jacob Devarieux and going by the popularity of previous concerts in 1988 and 1991, organizers are expecting thousands of fans to fill the stadium.

On top of the entertainment side of the festival some new elements have been introduced this year including a symposium on traditional dances bringing together member countries of the Indian Ocean Commission (IOC). The aim is for the possible inscription on UNESCO’s representative list of intangible cultural heritage of humanity.

A similar Symposium will also be organized on the traditional creole architecture.

There will also be exhibitions as well as seminars on the Creole language, herbal medicine, some of which will be attended by researchers from Mauritius, Reunion and Cabo Verde.

As is customary the different schools, work places and other groups will be choosing a theme that depicts an aspect of the creole culture to participate in the much anticipated "Laserenad" a display of music and dance in the capital of Victoria.

Three Creole plays based on Seychelles' history and day-to-day realities will also be staged next week. One of them "Bon Aniverser Kaptenn" (Happy Birthday Captain) is based on a chilling story of Somali pirates, who have plagued the Seychelles since 2009 and taken Seychellois seafarers and fishermen hostage in Somalia on three occasions.

While the majority of the manifestations including musical performances, art exhibition and fashion show amongst others will be held on the main Seychelles island of Mahe, the second and third most populated islands of Praslin and La Digue will also be organizing their fair share of activities.

Following complaints from the public in the past that many of the event during Festival Kreol are by invitation only, this year the Principal Secretary for Culture, Benjamine Rose who is also chairing the organising committee said “we have tried to render nearly all events accessible to the public.”

“This year our programme is filled with activities for all ages and we have ensured that the general public will be able to take part in the festivities. We need to make Festival Kreol the event whereby Seychelles and the Creole People join together to celebrate their identity. I call on all Seychellois to join in the Creole festivities during the coming days to show our very own unique Creole way and demonstrate that we are all proud to be part of the creole world,” added St Ange.

The contribution of Seychellois singers towards the promotion of the Creole music will also be recognized.

Four more singers and musicians have been selected by the Seychelles Musicians Association (SEMAS) to join David Philoe and Francois Havelock in the "Walk of Fame" to have their names printed on the floor at the entrance of the National Library, St Ange during the press conference but did not reveal their names.

The week-long of festivities will end with the traditional closing ball (Bal Asosye) where typical creole drinks and dishes will be served while the sounds of traditional musical instruments will resonate keeping people on their toes from 8pm till 6 in the morning the next day.

This year the ball will be held at the former Reef Hotel instead of the Creole Institute at Au Cap on the eastern coast of Mahe to be able to cater for more people as this is one of the activities that the tickets gets sold out quickly each year. A similar ball will be taking place at the International Conference Centre's Sea Front Restaurant in Victoria.

The Committee spearheading this year's Festival Kreol is calling on all Seychellois to join in the celebrations to of the Seychelles creole heritage.

Creole is one of the three official languages of the Indian Ocean archipelago alongside English and French.