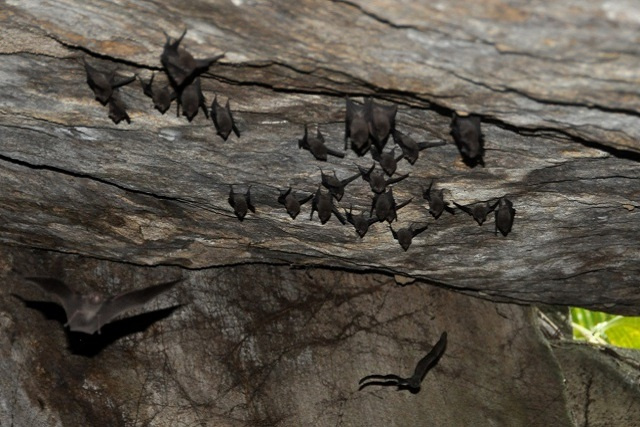 The sheath-tailed bat commonly known by locals as sousouri bannann can be distinguished from others by the sheath behind their hind legs. (Island Conservation Society)

(Seychelles News Agency) - A census is underway by the Ministry of Environment to determine the current situation of the Seychelles sheath-tailed bat, an endemic species which is on the brink of extinction.

A conservation officer in the department, Sophie Morel, told SNA that the ministry conducts a census on the population of "this critically endangered species every year on Mahe whereas the Island Conservation Society (ICS) monitors the population on Silhouette Island. To this day, the sheath-tailed bat is found only on Mahe and Silhouette."

Morel said that in last year's census, the population showed no signs of an increase.

The sheath-tailed bat commonly known by locals as sousouri bannann can be distinguished from others by the sheath behind their hind legs. It is listed on International Union for Conservation of Nature (IUCN) as critically endangered.

A conservation officer of the Island Conservation Society (ICS), Nasreen Khan, told SNA that the species "is one step away from extinction with only an estimated 30 – 100 individuals left in Seychelles."

She said that the only known places known to have the bats are on Mahe where three small roosts have been located and Silhouette.

"Silhouette Island hosts what is considered to be the least disturbed and largest sheath-tailed bat roost in the country and therefore in the world. Those who have lived on Silhouette Island a long time ago often talked about the bats living on the roof of their houses. A reality, which is now no longer the case," said Khan.

The decline in the population of the sheath-tailed bat has been linked to several causes, namely roost disturbance, habitat loss and declines in insect availability resulting from the use of pesticides.

Khan said that extensive work is being done by the ICS in an attempt to save the sheath-tailed bats and Silhouette is a last resort for the survival of the bats.

"ICS has already put in place various measures to try and save the bats' precarious ecosystem on Silhouette. These include an awareness campaign to prevent the over-usage of pesticides commonly used to control mosquitoes, which could reduce the population of moths, beetles and other insects that the bats feed on," said Khan.

She added that ICS has also been working with Hilton Hotel on Silhouette to stop weekly fogging in critical areas where the bats roost and feed and that since then the "bat population has had a slow steady increase in numbers since this intervention from 25 to 30+ individuals, and once in 2020 recorded a total of 37 bats."

In an effort to save the habitat and ecosystem of the bats, ICS has also been restoring Silhouette's native plant garden which features over 30 species of indigenous trees, shrubs and other plants.

"We continue to plant native trees in this area and expect as the trees grow, the native insects will flourish and will provide more food to the bats to ensure their survival," said Khan.

She has emphasised on that there need to be more awareness programmes for this species and the need to protect it and to raise funds for the protection of the species, ICS has also launched a campaign with T-shirts and cups with 'Save Our Bat' printed on them.

The cups are being sold at the ICS Head Office on Mahe and the Conservation Centre on Silhouette at SCR250 rupees.