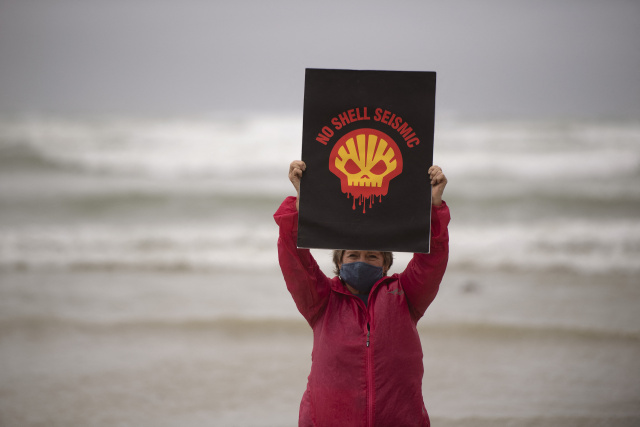 (FILES) In this file photo taken on December 05, 2021 A woman holds a placard on the beach as hundreds of people(not visible) take part in a protest against the plan by Dutch oil company Shell to conduct underwater seismic surveys along South Africa's East coast, at Muizenberg Beach, in Cape Town. A South African court on December 28, 2021 banned oil and gas giant Shell from conducting seismic exploration off the country's tourist "Wild Coast", a victory for environmentalists who were concerned about the impact on marine wildlife. (RODGER BOSCH / AFP)

(AFP) - A South African court on Tuesday blocked Shell from using seismic waves to explore for oil and gas in the Indian Ocean, in a victory for environmentalists worried about the impact on whales and other species.

Backing a suit filed by conservationists, the High Court in the Eastern Cape town of Makhanda ruled that Shell was "hereby interdicted from undertaking seismic survey operations."

The Wild Coast is a 300-kilometre (185-mile) stretch of natural beauty, dotted with marine and nature reserves.

Shell's scheme entails using seismic shockwaves which bounce off the sea bed, and whose signature can point to potentially energy-bearing sites.

"Many sea creatures will be affected, from whales, dolphins, seals, penguins to tiny plankton that will be blasted," said Janet Solomon, of the environmental group Oceans Not Oil in the runup to the hearing.

Exploration had been scheduled to start on December 1 and last up to five months.

A Shell spokesperson said Tuesday: "We respect the court's decision and have paused the survey while we review the judgement.

"Surveys of this nature have been conducted for over 50 years with more than 15 years of extensive peer-reviewed scientific research."

The campaigners were jubilant at the ruling, but stressed that the relief was only temporary.

"It's a huge victory," said Katherine Robinson of the NGO Natural Justice.

"But the struggle is not over -- this decision is just the interdict. We understand that the proceedings will continue."

A petition against the project had gathered nearly 85,000 signatures.

Campaigners said the scheme would entail "one extremely loud shock wave every 10 seconds, 24 hours a day, for five months at a time."

Shell argued that it took "great care to prevent or minimise" the impact on wildlife, and promised that the work would strictly follow the guidelines of the Joint Nature Conservation Committee, a UK government adviser on nature conservation.

On Tuesday, it also stressed what it described as the benefits for South Africa if oil and gas were found.

"South Africa is highly reliant on energy imports for many of its energy needs," the company's spokesperson said.

"If viable resources were to be found offshore, this could significantly contribute to the country’s energy security and the government’s economic development programmes."

South Africa's energy ministry had backed the scheme, and lashed those who opposed it as thwarting investment in the country's development.

The High Court's ruling comes after a lower court rejected the conservationists' suit in early December.

Several fishermen and local groups were also part of the petition.

General » Be a reporter: Write and send your article » Subscribe for news alert
Tags: SAfrica, energy