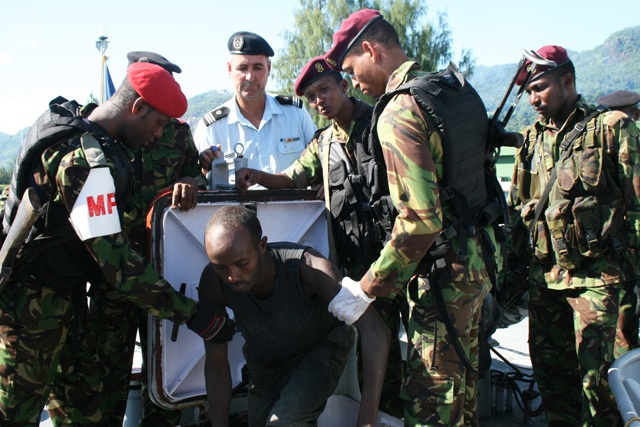 File photo: A Somali pirate, part of a group of 6 pirates caught at sea by the Seychelles defence forces after they had taken a Seychelles fishing boat hostage , 31 March 2010 (Seychelles News Agency)

(Seychelles News Agency) - How are the authorities in Somalia’s autonomous regions of Puntland and Somaliland faring in implementing international standards at the prisons built for convicted Somali pirates to serve their sentences?

This was one of the main objective of a recent visit of members of the International Monitoring Committee (IMC) to the Garowe (Puntland) and Hargeysa (Somaliland) prisons, two detention facilities built by the United Nations Office on Drugs and Crimes (UNODC), as part of its Piracy Prisoner Transfer Programme.

It was in the UNODC’s 2011 report of the secretary general’s special advisor on legal issues related to piracy off the coast of Somalia that calls were initiated to build two prisons in Puntland and Somaliland respectively, each with a 500 bed capacity.

In accordance with the agreements between the UNODC and the governments of the two autonomous regions the International Monitoring Committee, IMC, was also established with the aim of governing the operation of the mentored prisons where pirates convicted in regional prosecuting countries are transferred to serve their sentences.

This is the first time though that the IMC made up of representatives from Seychelles, Denmark, the Netherlands, Norway, the United Kingdom and the UNODC has undertaken such a visit to the two prisons since the committee was set up.

The Superintendent of the Seychelles Prisons Maxime Tirant who represents the Indian Ocean island nation on the committee was part of the delegation that visited the facilities during the two-day visit that took place between October 5 and 7 during which they also had meetings with authorities of the two regions.

In a press statement issued this morning, the Seychelles Prison Services said the meetings provided an opportunity “to review the status of the current agreements, discuss future transfers of convicted pirates and more broadly explored opportunities for further cooperation in the areas of criminal justice and correctional services.”

“The IMC positively assessed the visit to both prisons where it was given full access to the detention facilities and elaborated specific recommendations for national custodial services to address with the support of UNODC,” reads the statement.

The IMC that has a mandate to conduct periodic inspections of the Garowe and Hargeysa prisons also held talks with the prisoners.

According to the press statement, the President of Puntland and the Ministry of Justice in Somaliland reiterated their support to the UNODC and the international donor community while acknowledging the advancement of the condition of prisoners and benefits that UNODC programs have brought about in the areas of criminal justice and detention.

The next visit of the IMC is scheduled to take place in approximately six months.

The country has been greatly affected by the scourge of piracy which has been plaguing the Indian Ocean since 2005, affecting the islands' tourism and fisheries industries where Seychellois fishermen have also been held captive by Somali pirates.

Since then, Seychelles has been working with international partners to apprehend and prosecute suspected Somali pirates that have seen the island nation prosecuting the largest number of Somali pirates between 2009 to 2013.

Statistics from the Seychelles Prison Service show there are currently a total of 41 Somali pirates being held at the Seychelles Prison at Montagne Posee prison in the lush tropical mountains leading to the western part of the main inhabited island, Mahé, where they are kept separate from the local prisoners.

Out of this number, 25 Somali pirates have already been sentenced and are awaiting transfer to either of the two prisons built in Somalia to continue their sentence whereas the remaining 16 are still on remand awaiting trial.

So far 111 Somali pirates from the Seychelles prison have been repatriated to either of the two prisons in Garowe and Hargeysa.