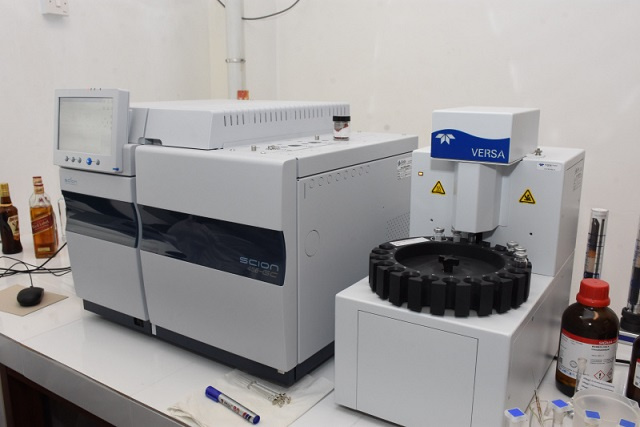 The CEO said that the new equipment will help to know if the content of alcoholic beverages is in line with standards and regulations. (Seychelles Nation)

The gas chromatograph (GC) room was opened recently at the Seychelles Bureau of Standards at Providence on the eastern coast of Mahe, the main island. It was purchased through funding made available under the COMESA Fund, to support the implementation of a government policy on alcohol prevention and abuse.

A gas chromatograph is an instrument used in analytical chemistry for separating and analysing compounds that can be vaporized without decomposition. Its typical uses include testing the purity of a particular substance or separating the different components of a mixture.

The chief executive of the Seychelles Bureau of Standards (SBS) told a press conference that the new equipment will help authorities know if the content of alcoholic beverages is in line with standards and regulations.

"It will help the two regulators -- the Public Health Authority that administers the Alcoholic Drinks Control Act, and SRC (Seychelles Revenue Commission) that is reforming its excise tax for alcohol. It will help them in the sense that the government will be able to properly collect tax on alcohol," said Ally.

He added that the new testing facility will also help the manufacturers as well, who are placing alcoholic beverages on local and international markets.

"It will help us establish the percentage and quality of alcohol to know if they are in line with the standards, regulations and the label on the products. If they are not in line, concerned authorities and regulators will be able to take actions against them," said Ally.

The installation and commissioning of the new facility were undertaken by an engineer from Gibbs Technologies in South Africa in November. The GC room also houses the new dry air nitrogen generator, uninterrupted power supply and a computer and printer for the new GC.

Apart from the installation and commissioning, the engineer also provided a three-day onsite application training to four SBS laboratory staff.  A series of trial tests of alcohol samples have already been carried out to check the performance of the equipment and techniques of testing.

SBS is the national Quality Infrastructure Service provider in Seychelles and is designated by the Public Health Authority as the main official laboratory for the testing of alcoholic beverages.