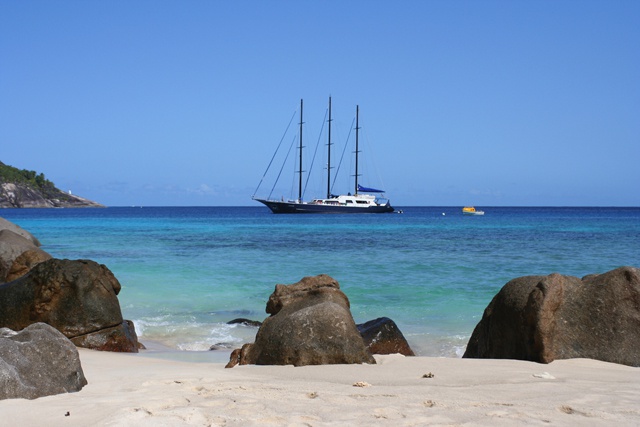 The Seychelles archipelago is surrounded by the Indian Ocean. Two Seychellois men, who spent 21 hours drifting at sea six years ago describe their terrifying experience that left them traumatised and lucky to be alive.(Gerard Larose, STB)

(Seychelles News Agency) - Surrounded completely by the Indian Ocean, the islanders of the Seychelles, many of them still dependent on fishing for their livelihoods, have wild and wonderful tales to tell of the mysteries of the sea. But for two Seychellois men, spending 21 hours drifting at sea was a terrifying experience that left them traumatised and lucky to be alive.

It may have happened six years ago, but the experiences of that fateful day have remained fresh and vivid in the minds of the two men. SNA caught up with Rodney Payet and Gilly Anacoura to find out more about their near-death experience and miraculous survival.

At daybreak on Saturday 11 October 2008 two friends decided to head out to sea on a fishing trip. At the age of 27 back then Rodney, a senior IT technician from North East Point on the main inhabited island of Mahé, had just bought a boat from his friend Gilly, who was 45 years old.

The two decided to take the boat, which Gilly had previously equipped with a fifty horsepower engine and lovingly named “Tok-Tok”, to a fishing spot some nine kilometres from Port Victoria, just off Sainte Anne Island.

“Close to midday, we decided to go north towards Glacis and facing Silhouette, at a small islet called l’Ilot”, recalled Gilly. Travelling towards Glacis located in the north of Mahé, they noticed several people fishing at Machabee. The other group hailed Gilly, a well-known person in his local community.

Once again unsuccessful in their attempts to catch fish, the two friends moved to yet another location, this time three nautical miles north-west of l’Ilot, a little after one in the afternoon. Little did they know that the wind had shifted and that trouble was brewing.

“The sea was calm and we had eaten and drank tea earlier. We caught a few fish too!” said Anacoura.

“But suddenly the current became too strong and a few choppy waves started to form. I instructed Rodney to start the engine so we could move inland.”

Before the anchor could be lifted, a large wave splashed into the boat.

“I did not think much of it but asked Rodney to switch on the water pump, anyway,” recounted Gilly. “Again, before we could do anything, another wave came splashing in, and as the boat started to roll over, I automatically jumped overboard.”

Both strong swimmers, the pair found their way back to their capsized vessel, now wallowing sadly upside-down in the water, so that they could be more visible to passers-by and wait to be rescued. But the help they hoped for was not to come.

For a few hours, the two men waited patiently but on that late Saturday afternoon, there were no other vessels in the vicinity.

The closest they came to being rescued was when a tanker named Anuket Jade, leaving Port Victoria, came straight towards them only to divert, presumably upon seeing them and their sunken boat. Later, a plane passing by prompted frantic waving of shirts, but to no avail.

“At that point, we decided it was best to leave the boat,” said Gilly.

The men donned life-vests and tied themselves together with ropes, with yellow buoys for additional buoyancy and visibility. Thus kitted out, they made the decision to make a swim towards safety.

First aiming to swim to the nearby shore of Glacis, in the north-eastern point of Mahé, the pair found themselves being swept out to sea and the shoreline disappearing from view. Trying their best to make it to another islet nearby, they struggled in vain against the current.

Out into the depths

As the sun began to set and the moon rose over the rapidly darkening sea, fear began to creep in.

“Fear was always there and more so as it got darker and we kept missing the masses of land we swam towards,” said the much younger Rodney. “I feared never reaching land, of drowning, being killed by passing boats or being eaten by a sea creature.”

To make matters worse, the two men were pestered by jellyfish which clung to their shirtless and unprotected bodies, burning their flesh and sending small electric shocks through their body.

Shivering with cold, they had been swept away from the main island of Mahé and were approaching the second most populated island of Praslin, 44 kilometres away.

“We followed a bright star and once we got closer to Praslin, we saw three lights which we used as our beacon,” said Gilly. “Once we noticed we were drifting away from the lights on Praslin, we swam back on course.”

They had by now been swimming for hours. Rodney, who suffers from hypertension, had fortunately taken his medication that morning but he recalled suffering from pain in his ankle from a sprain he had incurred prior to the accident.

Rodney, thirsty from the many hours at sea, had swallowed some sea water, which only made him thirstier as the hours passed by.

“The more I drank, the more I became thirsty,” said Rodney.

Swimming in a northerly direction, the first island they encountered in the early hours of Sunday was Cousine Island, a small National Park reserve located just kilometres of Praslin.

“We must have swum around it for hours. But the reef was almost impenetrable and the current was too strong and pushing us back the way we came,” said Anacoura.

Finally managing to reach shallow water and then land, the pair finally decided to go separate ways to try and find help.

“Our legs were numb and we felt dizzy,” said Rodney, who resisted his first survival instinct to drink from a dirty water basin due to his extreme thirst.

When they finally found the island’s offices and staff quarters, the manager of Cousine administered basic first aid to the two men. They were then ferried across to the clinic on the nearby island of Praslin for examination and were declared healthy enough to be transported back to the mainland.

Saved by their life-vests

“Flying overhead in the plane to Mahé, I saw the large empty sea we had crossed during the night and I had goose-bumps,” said Gilly.”That was the only time I became frightened and believed we were being watched over by a higher power.”

The wheelchair-bound men, too weak to walk, went for x-rays and more tests at the Seychelles hospital at the urging of their friends and relatives.

After exerting themselves against the elements for nearly 21 hours, both had extremely high levels of creatine kinase in their bodies, an enzyme that is released after excessive physical exertion.

Dehydrated and weak, Rodney and Gilly had to spend the next three days in hospital.

Six years after their ordeal, Rodney and Gilly are still friends, but they have not ventured out to sea together since that fateful afternoon. Gilly has been out on several fishing expeditions with others but the younger Rodney says at times he suffers from anxiety.

“They said they searched for us, but I don’t think they did,” said an emotional Rodney. “We were so close to the island. How could they miss us and not search further? We could have been dragged out to sea never to be seen again.”

As for Gilly, the boat he bought in 2008 to replace “Tok-Tok”, the boat he sold to Rodney, has never gone out to sea.

“Had we not had life-vests we would have surely drowned from fatigue but we were saved by our good decisions and our will to fight.”