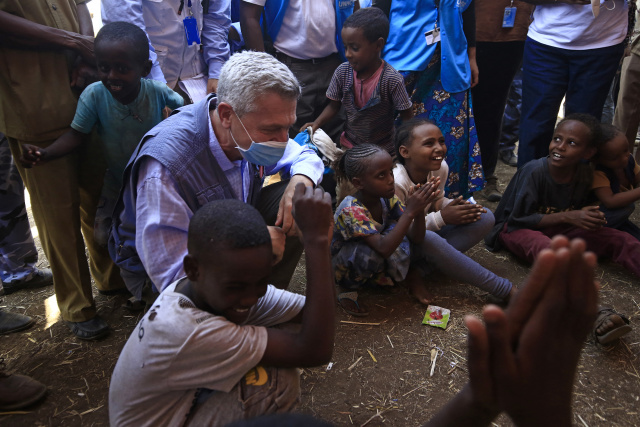 UN High Commissioner for Refugees Filippo Grandi (2nd-R) visits Ethiopian refugees who have fled the Tigray conflict, at a transit centre in Sudan's border town of Hamdayit on November 27, 2020. Over 43,000 refugees have crossed into Sudan since fighting broke out in Tigray on November 4, the UN High Commissioner for Refugees Filippo Grandi said Friday, as he visited Sudanese camps crammed with those fleeing the conflict in northern Ethiopia. Hundreds have been killed in fighting between the federal government of Ethiopia's Prime Minister Abiy Ahmed and dissident forces of the regional ruling party, the Tigray People's Liberation Front (TPLF). (ASHRAF SHAZLY / AFP)

(AFP) - More than six million people in drought-hit areas of eastern and southern Ethiopia will need "life-saving" assistance this year, the UN's emergency response agency said in a new report.

The drought is adding to the humanitarian crisis in Ethiopia, where the war between government forces and the rebel Tigray People's Liberation Army (TPLF) in the north of the country has already left millions there in desperate need of aid.

The drought in the Somali, East and South Oromia regions is having a "devastating impact on the lives and livelihood of pastoralist and agro-pastoralist communities living in the area after the third consecutive failed rainy season", the UN Office for the Coordination of Humanitarian Affairs said in a statement posted online this week.

It said more than 6.4 million people in the afflicted areas were estimated to require food assistance this year, and that while the Ethiopian government and its humanitarian partners were working to tackle the crisis, "the response is not commensurate with the dire need."

About three million people in Somali and South Oromia were suffering from water shortages, while an unknown number have been forced from their homes.

Several hundred thousand livestock deaths have also been reported because of a lack of water and feed, according to the report.

In November, the UN's World Food Programme (WFP) said the number of people facing hunger across northern Ethiopia because of the conflict had surged to 9.4 million, in Tigray and also the neighbouring regions of Amhara and Afar.

In Tigray itself, which is under a de facto blockade, the United Nations has said that hundreds of thousands of people are living in famine-like conditions.

Africa » Be a reporter: Write and send your article » Subscribe for news alert
Tags: Ethiopia, UN