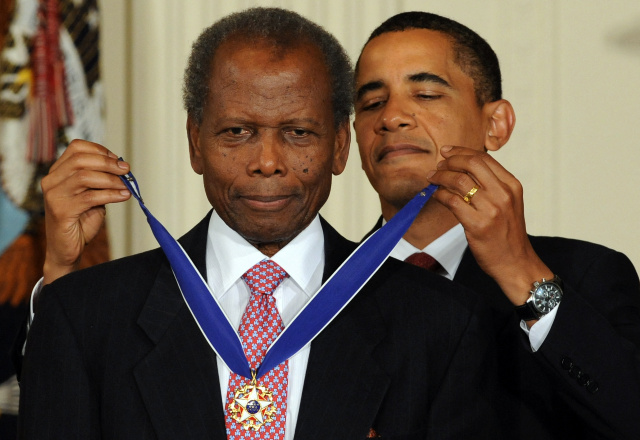 (FILES) In this file photo taken on August 12, 2009, US President Barack Obama presents the Presidential Medal of Freedom to ambassador and actor Sidney Poitier during a ceremony in the East Room at the White House in Washington, DC. Sidney Poitier, Hollywood's first major Black movie star, has died, the deputy prime minister of the Bahamas said on January 7, 2022. Poitier, who held dual US and Bahamian nationality, was "an icon, a hero, a mentor, a fighter, a national treasure," Deputy Prime Minister Chester Cooper said on his official Facebook page.
(Jewel SAMAD / AFP)

(AFP) - Sidney Poitier, Hollywood's first major Black movie star and the first Black man to win the best actor Oscar, has died at 94, prompting an outpouring of grief from the entertainment industry and beyond.

Stars including Denzel Washington along with current and past US presidents Joe Biden and Barack Obama led emotional tributes as news broke Friday of the death of the celebrated thespian.

"He was a gentle man and opened doors for all of us that had been closed for years," said Washington, a two-time Oscar winner, in a statement to AFP.

"To Sir... with Love. Sir Sidney Poitier R.I.P. He showed us how to reach for the stars," tweeted Oscar winner Whoopi Goldberg.

Poitier died at his home in Los Angeles late Thursday, according to Davis' director of communications Latrae Rahming. The spokesman did not immediately respond to questions about the cause of death.

The first male Black star nominated for an Academy Award with 1958's "The Defiant Ones," Poitier won his groundbreaking Oscar six years later for "Lilies of the Field."

At a time of racial tension in America in the 1950s and 1960s, Poitier balanced success with a sense of duty to choose projects that tackled bigotry and stereotypes, including his 1967 classics "Guess Who's Coming to Dinner" and "In the Heat of the Night."

"For me, the greatest of the 'Great Trees' has fallen: Sidney Poitier," wrote Oprah Winfrey.

Biden called him a "once-in-a-generation actor and advocate whose work carried so much dignity, power, and grace that it changed the world on and off the big screen."

Poitier was awarded an honorary Oscar in 2002 for his "extraordinary performances" on the silver screen and his "dignity, style and intelligence" off of it.

On television, he portrayed icons of history such as South Africa's first black president Nelson Mandela and the first Black justice on the US Supreme Court, Thurgood Marshall.

And in 1997, he took up a ceremonial post as Bahamian ambassador to Japan.

He was awarded the US Presidential Medal of Freedom -- the country's highest civilian honor -- by Obama in 2009.

"Through his groundbreaking roles and singular talent, Sidney Poitier epitomized dignity and grace, revealing the power of movies to bring us closer together. He also opened doors for a generation of actors," tweeted Obama.

"Michelle and I send our love to his family and legion of fans."

Prime Minister Davis said: "Our whole Bahamas grieves and extends our deepest condolences to his family."

"We admire the man not just because of his colossal achievements, but also because of who he was. His strength of character, his willingness to stand up and be counted and the way he plotted and navigated his life's journey."

Poitier was married to his second wife Joanna since 1976, and had six children as well as numerous grandchildren and great-grandchildren.

"Sidney Poitier. What a landmark actor. One of a kind," said "Westworld" star Jeffrey Wright.

"He blazed a tremendous path for thespians such as me. I am forever grateful," added veteran actor Colman Domingo.

And messages poured in from beyond Hollywood, with Bollywood star Anil Kapoor praising "my childhood idol, lifelong inspiration & star of some of my favorite films."

"A great friend, I learned a lot from watching Sidney and how he carried himself with such grace and class," tweeted basketball legend Magic Johnson.

"It was a privilege to call Sidney Poitier my friend," wrote Washington, adding: "God bless him and his family.”

General » Be a reporter: Write and send your article » Subscribe for news alert
Tags: Entertainment, Bahamas, US