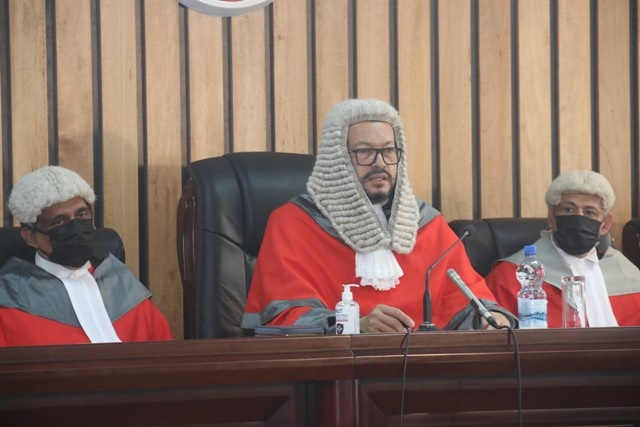 Govinden said that the judiciary introduced policies last year that enabled journalists to film and take pictures on the courts' grounds, so as to better give people information. (Seychelles Nation)

(Seychelles News Agency) - Seychelles' Chief Justice Rony Govinden on Monday called on the media to avoid censoring reports on court proceedings for no legal reasons, during his address at the official reopening of the Supreme Court.

"I am concerned that the media may not be living up to its responsibilities. I have noticed how the broadcast and publication of criminal proceedings are overly edited for no legal reasons," stated Govinden.

The observation comes after press, broadcast and social media debates were sparked on whether or not the names of suspects in a case should be made public after the arrest of several high-profile figures in a corruption and money laundering case currently in the Supreme Court. The majority of media houses decided not to reveal the identity of the suspects when the court ordered their detention and only revealed who they were when they were charged by the court.

"My personal view is that if the criminal proceedings are public, it is the duty of the media to make it public and that includes giving the names and showing the uncensored images of the person involved," he added.

Govinden said that the judiciary introduced policies last year that enabled journalists to film and take pictures on the courts' grounds, so as to better give people information.

However, to recall, Rassin Vannier, SNA's chief editor, had his mobile phone confiscated by police officers late last year, while covering the same corruption case, which was returned to him soon after.

For the first time since the Supreme Court has been holding its reopening ceremony, Govinden addressed those attending the event in Creole – the mother tongue of the 99,000 people living in Seychelles. Creole, English and French are the country's three official languages, while the official language of the courts is English.

Discussing other areas that need improvement, Govinden expressed the judiciary's wish to use available technologies to better run the courts.

The decision comes as the COVID-19 pandemic presented several challenges and difficulties in doing so. He explained that this had, however "presented an opportunity to embrace technology through virtual hearings and the establishment of fully functional e-Courts in future".

"The Judiciary recognises that it is imperative to embrace technological changes, and the preparatory work must be done now, including putting together a legislative framework that ushers in the e-Court system. This year will see continuing efforts in this area," he said.

According to Govinden, there have been increasing complaints made to the Supreme Court concerning some lawyers and he was "concerned with the inadequacy of the legal framework governing legal practitioners."

For this reason, a multi-stakeholder review of the present processes and laws will be held in consultation with members of the legal profession and the Office of the Attorney-General this year. Govinden explained that this is aimed at bringing about reforms in the Legal Practitioner's Act and the introduction of a Seychelles Bar Council Act.

Traditionally, the annual reopening of the courts in Seychelles is marked with a church service, procession of judges and magistrates on Independence Avenue in the capital Victoria followed by the inspection of  the guard of honour with the music of a brass band outside the courthouse.

This year, as was the case for 2020, the event was held on a smaller scale due to the rise in active cases of COVID-19 in the island nation under the theme "embrace change".