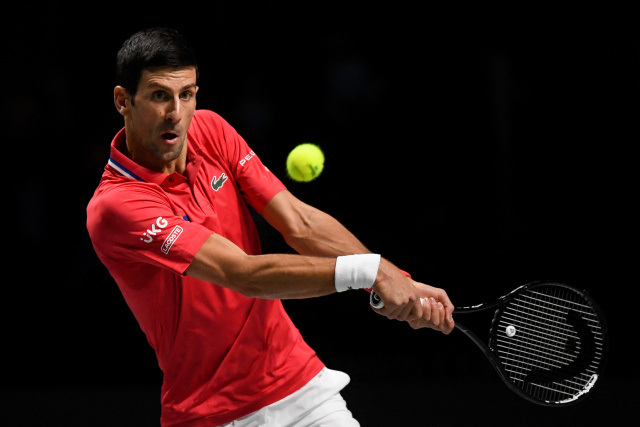 (FILES) In this file photo taken on December 2, 2021 Serbia's Novak Djokovic hits a returns against Kazakhstan's Alexander Bublik during the men's singles quarter-final tennis match between Serbia and Kazakhstan of the Davis Cup tennis tournament at the Madrid arena in Madrid. Tennis superstar Novak Djokovic's legal battle to stay in Australia and chase a record 21st Grand Slam opened on January 10, 2022, but online access to media was delayed by a computer glitch, a court spokesman said. (OSCAR DEL POZO / AFP)

(AFP) - Tennis superstar Novak Djokovic's dream of chasing a record 21st Grand Slam hung in the balance Tuesday as the Australian government pondered whether to cancel his visa, again.

The world number one scored a stunning courtroom victory the day before, overturning the government's decision to cancel his visa on Covid-19 vaccination grounds.

The unvaccinated 34-year-old Serbian ace now says he is determined to stay in Melbourne and compete in the Australian Open, which starts in just six days.

"I remain focused on that. I flew here to play at one of the most important events we have in front of the amazing fans," Djokovic said on Instagram late Monday, attaching a photo of himself and his team standing on the Australian Open centre court.

Djokovic, a nine-time Australian Open champion, jetted into the country six days ago carrying a medical exemption to vaccination due to a positive test for Covid-19 on December 16 last year.

After overnight questioning at Melbourne airport, border officials decided that Djokovic's medical exemption was not valid, cancelled his visa and transferred him to a detention centre pending deportation.

"I am not vaccinated," Djokovic had told the border official, according to a transcript released by the court. He expressed bewilderment that his medical exemption, approved by two medical panels in Australia, was not being accepted.

The limited number of foreigners allowed into Australia must be fully vaccinated or have a medical exemption. The government insists that a recent infection does not count as an exemption.

Federal circuit court judge Anthony Kelly dramatically reversed the visa decision Monday, ordering that Djokovic's visa cancellation be "quashed", that he be released immediately from detention and the government pay his legal costs.

The government had surrendered the case after conceding that Djokovic's airport interview was "unreasonable" because the player had not been given the promised time to respond before his visa was torn up.

It was "the biggest victory in his career, bigger than all his Grand Slams", his mother Dijana said at a press conference in Belgrade.

"Truth and justice came to the light. I would like to thank the justice system of Australia," said his brother Djordje in Belgrade, adding that Djokovic had been able to train since being released from detention.

Australia's government says it is considering its next move.

"It remains within immigration minister Hawke’s discretion to consider cancelling Mr Djokovic’s visa under his personal power of cancellation," his office said in a statement to media late Monday.

"The minister is currently considering the matter and the process remains ongoing."

It was unclear where Djokovic was staying in Melbourne following his release.

Until Monday, he had been held at the former Park Hotel, a five-storey detention facility, which holds about 32 migrants trapped in Australia's hardline immigration system -- some for many years.

Hundreds of Djokovic fans, anti-vaccination protesters and migration rights activists had rallied outside the centre daily during his stay, scrawling graffiti on the walls, hanging banners from the building and singing and dancing.

On Tuesday morning, there were just two television reporters outside and no protesters.

A lonely cardboard sign read: 'Free Novak and all the refugees'. Chalk scrawled on front of the hotel said: '#gameover free the refugees'.

The ATP, which runs the men's tennis tour, said the affair leading up to the court case had been "damaging on all fronts, including for Novak's well-being and preparation for the Australian Open".

The top tennis body said it respected the "sacrifices" of Australians, who have endured travel restrictions and rolling lock-downs for two years."

But it added: "In travelling to Melbourne, it's clear Novak Djokovic believed he had been granted a necessary medical exemption."

Rafael Nadal, one of Djokovic's main rivals for the title, said "it is the fairest thing" for his rival to play in the Australian Open.

"Regardless of whether or not I agree on some things with Djokovic, without any doubt, justice has spoken," Nadal told Spanish radio station Onda Cero.

Tennis great Martina Navratilova said on social media: "Though I disagree with not getting vaccinated; at the end of the day it seems Novak did play by the rules as they were for the exemption and was burned. Let him play."

Though it had no bearing on his court case, Djokovic's claim of a positive test on December 16 stirred controversy after it emerged he had attended a gathering that day for the Serbian national postal service, which launched a stamp series in his honour.

And pictures shared by the Belgrade tennis federation showed him at a young players' event in the city on December 17.

It was reported that he handed over cups and prizes to players. No one was wearing a mask.