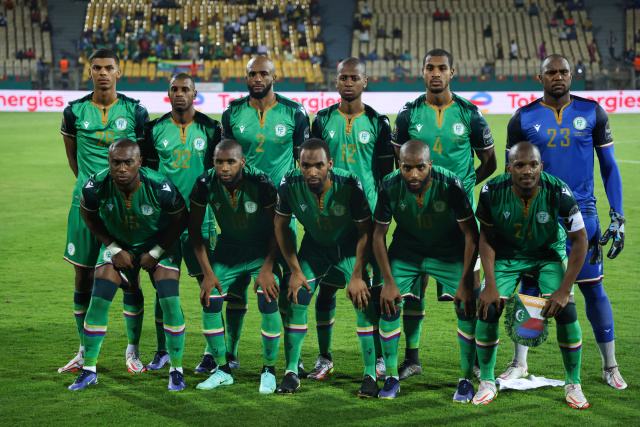 Comoros players pose for a group photo during the Group C Africa Cup of Nations (CAN) 2021 football match between Comoros and Gabon at Stade Ahmadou Ahidjo in Yaounde on January 10, 2022. (Kenzo Tribouillard / AFP)

(AFP) - Aaron Boupendza stepped up in the absence of Covid-stricken Pierre-Emerick Aubameyang to earn Gabon a 1-0 victory over Africa Cup of Nations debutants Comoros on Monday.

Qatar-based Boupendza struck the lone goal on 16 minutes, smashing the ball high past Comoros goalkeeper Ali Ahamada from a tight angle after being played in by Louis Ameka Autchanga.

The Indian Ocean islanders are one of two teams appearing at the continental tournament for the first time, along with Gambia.

Only three of 11 newcomers have reached the knockout rounds since the turn of the century, although Madagascar did make it to the quarter-finals at the first attempt in 2019.

Gabon are participating for the eighth time. They have twice advanced to the last eight, in 1996 and 2012.

Patrice Neveu's side moved level on three points with Morocco, 1-0 winners over Ghana earlier in the day.

"That's three points that should allow us to gain in confidence," said Neveu.

"I know and I'm completely aware in terms of our performance, we need to do more. But I had four key players absent - even if it's the same for other teams."

Lemina has been cleared to return to face Ghana in Gabon's second match on Friday, but the status of Aubameyang remains uncertain.

"Pierre is in good spirits. He's exercising in his room and is working on a bike. He doesn't have any fever. We hope his test will turn negative."

Meanwhile, Comoros have their work cut out with upcoming opponents Morocco ranked 104 places above them.