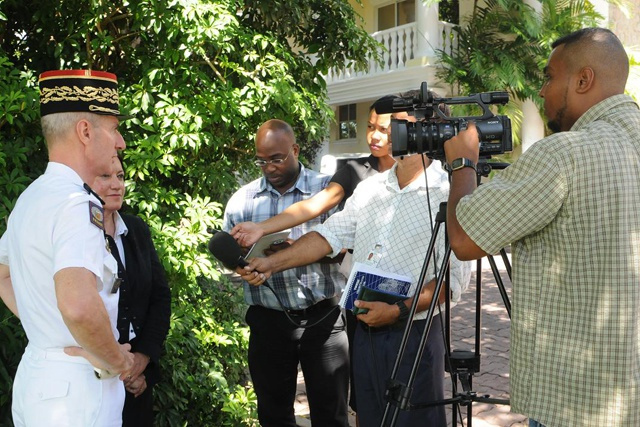 Vannier described the media landscape in Seychelles as one that is quite young and that "people have to keep in mind the press has only begun to work freely since 2016."(Seychelles Nation)

(Seychelles News Agency) - The press should be left to do its job without constant outside interference, according to Rassin Vannier, chairperson of the Association of Media Practitioners of Seychelles (AMPS), in response to a statement about media reporting made by Chief Justice Rony Govinden at the reopening of the Supreme Court on Monday.

Vannier, who is also chief editor of SNA, said that "it seems that we are slowly heading towards a slippery slope where people are trying to dictate the press' every movement. Instead, the press should be granted its autonomy so it has the freedom to choose what it does.”

In his address, Govinden spoke at great length about the media and the free press and said that "I am concerned that the media may not be living up to its responsibilities. I have noticed how the broadcast and publication of criminal proceedings are overly edited for no legal reasons." He added that "if the criminal proceedings are public, it is the duty of the media to make it public and that includes giving the names and showing the uncensored images of the person involved."

His statement came after print press, broadcast and social media debates were sparked on whether or not the names of suspects in a case should be made public after the arrest of several high-profile figures in a corruption and money laundering case currently in the Supreme Court. The majority of media houses decided not to reveal the identity of the suspects when the court ordered their detention and only revealed who they were when they were officially charged.

Meanwhile, Vannier described the media landscape in the western Indian Ocean Island state as one that is quite young and that "people have to keep in mind the press has only begun to work freely since 2016."

"I think that we should be careful of different individuals such as politicians and the judiciary interfering in the work of the press. We should also be careful that they do not try to manipulate the press for their own interests," he concluded.

However, Vannier said that he welcomes the Supreme Court's effort to put mechanisms in place to encourage press freedom in the country and help journalists to do their jobs, which is to inform the public.

"I also agree that what is said in the courts is in the public domain and that the press should be able to report on the topics with no fear. However, I believe the right to show suspects' faces is a decision that remains at the discretion of the respective media houses," he added.

The Seychelles Broadcasting Corporation (SBC) issued a statement to SNA on Wednesday, saying that less than one month ago, it reviewed its editorial policy on the identification of suspects of serious criminal cases, whereby the national broadcaster now identifies persons after they are charged. Its previous longstanding policy was to identify persons only when they were convicted.

SBC said the revision comes after wider internal and external discussions in view of a new media landscape where social media are providing uncensored information, both factual and fake, and where the national broadcaster is being asked to provide timely and factual information.

"However, other considerations will also be taken into account when naming individuals implicated, such as the seriousness and impact of the crime committed on the society and the country, and the public profile of the person/s involved in the case," added the SBC.

Furthermore, in response to the chief justice's public address, the SBC has requested to be given permission to film and provide live broadcasts of the court proceedings of the ongoing corruption and money laundering case, as well as other high-profile cases in the future.

Meanwhile, Clive Camille, founder and head of independent TV station Télésesel, said, "The CJ is thinking of the legality of the matter and it is true that it is not illegal to do so. The thing is that we as journalists have certain ethics that we abide by."

He said that Télésesel has requested to film inside courtrooms in the future.

"Once we set a precedent, everyone will receive the same treatment; whether its drugs cases, human trafficking, prominent politicians taking family members to court and even down to missing child support payments cases. Everyone will be subjected to the same treatment as of now," he concluded.

The privately-owned Today in Seychelles newspaper was the first to name former first lady Sarah Zarqhani Rene, the wife of late former President France Albert Rene, as a suspect held in detention in the ongoing corruption case, on its front page, who was later charged.

"To name but not shame is key, we refuse to shame. We had instances where we knew other media houses would be blurring the images/footage, and we got the best close-up facial expression of a suspect as they entered the courtroom in cuffs. However, we made the decision not to use such a photo as it would diminish the suspect as a person. We instead took a full-length image of the person instead of an illustration," said Betty Mondon, editor of the newspaper.

In other democratic countries, court reporting practices vary from full disclosure of suspects' identities to limited reporting to avoid pre-trial publicity leading to an unfair trial, but most reputable news providers report on high profile figures in society being arrested, detained or investigated by a court or the police, prior to being charged.

Editorial decisions tend to be weighed in relation to the gravity of a case and its public interest as well as the legal restrictions involved, where gag orders from courts sometimes restrict media reporting or close courtrooms entirely.

However, the damage caused by internet records concerning court action, which does not lead to a trial or when people are acquitted, has been recognised because the individuals named continue to face prejudice and unfair treatment in their lives due to these reports being online.

On June 16, 2021, the Associated Press (AP) news agency in the US said it would "no longer run the names of people charged with minor crimes, out of concern that such stories can have a long, damaging afterlife on the internet that can make it hard for individuals to move on with their lives."

"The name of the person arrested will live on forever online, even if the charges are dropped or the person is acquitted, said John Daniszewski, AP's vice president for standards. The policy does not apply to serious crimes, such as those involving violence or abuse of the public trust, or cases of a fugitive on the run, the AP said.

General » Be a reporter: Write and send your article » Subscribe for news alert
Tags: Association of Media Practitioners of Seychelles