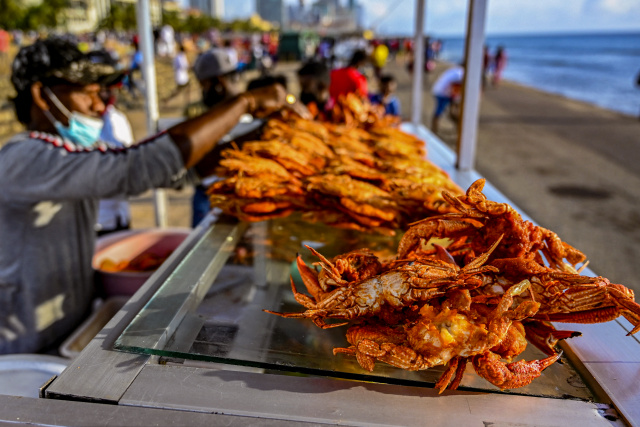 A street food vendor sells prawns and crabs from his cart at the Galle Face promenade in Colombo on January 1, 2022. (Ishara S. KODIKARA / AFP)

(AFP) - Sri Lanka ruled out an IMF bailout on Wednesday and said it plans to seek another loan from China to address an economic crisis that has led to food and fuel shortages.

The island's tourism-dependent economy has been battered by the pandemic, with supermarkets rationing goods and rolling blackouts imposed by power utilities unable to fund oil imports.

International rating agencies have warned of a looming sovereign default on Sri Lanka's $35 billion foreign debt as the treasury battles a crunch on foreign exchange reserves and a gaping budget deficit.

"The IMF is not a magic wand," he told a news conference in Colombo. "At this point, the other alternatives are better than going to the IMF."

Cabraal added that talks with China over a new loan were at an "advanced stage", and a fresh agreement would service existing debt to Beijing.

"They would assist us in making the repayments... the new loan coming from China is in order to cushion our debt repayments to China itself," he said.

Sri Lanka has borrowed heavily from China for infrastructure in the past, some of which ended up as white elephants.

Unable to repay a $1.4 billion loan for a port construction in the south, Sri Lanka was forced to lease out the facility to a Chinese company for 99 years in 2017.

The United States and India have warned that the Hambantota port, located along vital east-west international shipping routes, could give China a military toehold in the Indian Ocean.

Cabraal did not give an indication of the size of the loan sought from China, but said talks were also underway with India for a $1 billion credit line to fund a broad range of imports.

He also said Colombo will repay a $500 million sovereign bond that matures next Tuesday despite local business leaders publicly asking him to withhold the repayment and seek IMF help.