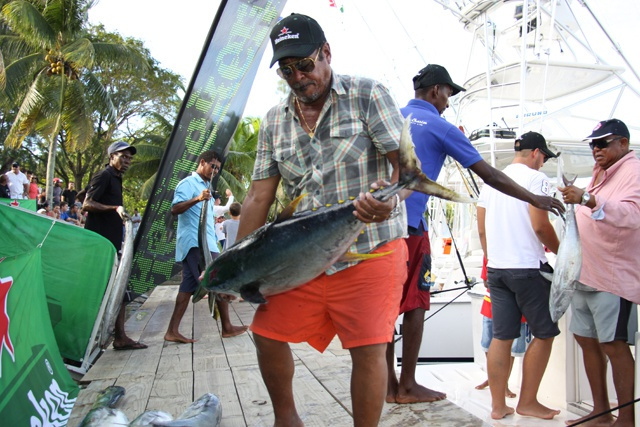 The season will open with the Heineken Slam on January 22. (Joe Laurence, Seychelles News Agency)

(Seychelles News Agency) - The 2022 sports fishing season will get underway on Saturday 22 this month with the Heineken Slam, earlier than usual, the chairman of the Seychelles Sports Fishing Club (SSFC), Tarak Patel, said last week.

The sports fishing season in the western Indian Ocean archipelago usually starts in April and Patel said that the club “has decided to move this tournament to January because this is the time where these fish are more present in our waters compared to March or April.”

The Heineken Slam 2022 tournament, which has been described as a very technical and challenging competition, will see the fishermen target the coveted 'slam', which consists of only three species of fish; the dorado, kingfish and yellowfin tuna.

Interested anglers need to submit their registration forms fees by Friday, January 21. The competition will start at 5 pm on Saturday, January 22 and end at 5 pm.

Patel said that the tournament is his favourite tournament but he will not be participating this year.

“I wish I could! Unfortunately, work commitments will not allow me to do so. I will be there to meet the boats when they come for the weigh in,” said Patel.

Team Paola won last year’s competition and with the technicality of the event, there is a different winner every year.

With nine tournaments on schedule for the year amid the threat of the COVID-19 pandemic, Patel said that they are continuing to look for ways to ensure the safety of everyone during the tournaments.

The SSFC has scaled down the weigh-in times and also made its traditionally large prize-giving ceremonies smaller, with fewer people.

"We have been doing a lot to prevent the spread of COVID-19 during the past year and having done the tournaments at the Seychelles Yacht Club in the past, it helps us to limit the number of people present," added Patel.

Among the tournaments this year, for the first time in almost 18 years, sports fishing will return to take place on Praslin, the second most populated island, with the Trevally Cup. Patel hopes that it will give a chance to participants from the island who found it hard to compete in tournaments held on Mahe, to also show what they are capable of.

"Aside from holding a tournament on Praslin this year, which is the Trevally Cup, to bring in more teams from there and La Digue as well, last year we also changed our rules to allow boats to leave from Praslin and La Digue when participating in tournaments on Mahe," Patel added.

In last year's competitions, there were teams from the UAE who competed in the final tournament of the year -- the Big Game Classic -- and Patel said he hopes to see many more teams from other countries competing in the future.

A junior tournament is also expected to take place this year while the season will end with a final tournament in December.

The SSFC was founded in April 2009 and is a non-profit association committed to promoting sport fishing in Seychelles.