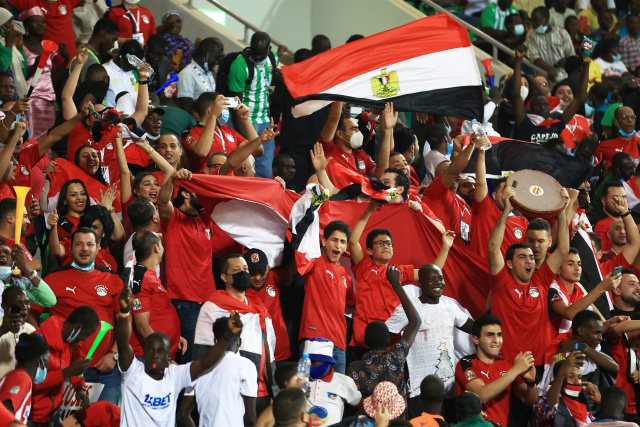 Egypt supporters cheer during the Group D Africa Cup of Nations (CAN) 2021 football match between Guinea-Bissau and Egypt at Stade Roumde Adjia in Garoua on January 15, 2022. (Daniel BELOUMOU OLOMO / AFP)

(AFP) - Mohamed Salah got back among the goals for Egypt on Saturday as his second-half strike handed the record seven-time African champions a crucial 1-0 win over Guinea-Bissau in Garoua that was not without controversy.

Salah's first-time finish at the back post in the 69th minute got his and his team's campaign in Cameroon up and running after they had lost 1-0 to Nigeria in their opening Group D game.

However, Guinea-Bissau were left fuming after a stunning 82nd-minute strike by Mama Balde was ruled out following a VAR review.

Egypt, who also hit the woodwork three times, will feel they deserved the victory on the balance of play and Carlos Queiroz's team now need only draw their last group game against neighbours Sudan in Yaounde on Wednesday to guarantee safe passage to the last 16.

"It was a really tough game and we were a little bit lucky with the foul," Salah admitted to broadcasters at the end of the match.

"We have to win our next game now to make sure we qualify and we will do our best to go as far as we can in the tournament."

Salah, who had not scored in any of his previous six appearances for Egypt this season, struck the post with just 84 seconds played.

The Liverpool star was then involved at the start of the 18th-minute move that ended with Omar Marmoush cushioning the ball down for Mostafa Mohamed to send another shot off the upright.

Salah finally broke the deadlock midway through the second half when he met Amr El Solia's floated ball to the back post with a first-time cushioned volley that Guinea-Bissau goalkeeper Jonas Mendes may feel he should have saved.

Balde thought he had equalised with a superb goal when he collected possession on the left wing, cut inside and unleashed a tremendous effort from just inside the box into the far corner.

However the referee ruled out the goal after reviewing the images, judging that Balde had grappled Egypt right-back Omar Kamal to the ground.

It was a let-off for the Pharaohs, who also survived in injury time when the lively Moreto Cassama's piledriver was saved by Mohamed El Shenawy.

The small west African nation of Guinea-Bissau are appearing at their third straight AFCON having never qualified before 2017, but they are left still searching for their first win at the tournament after eight attempts.