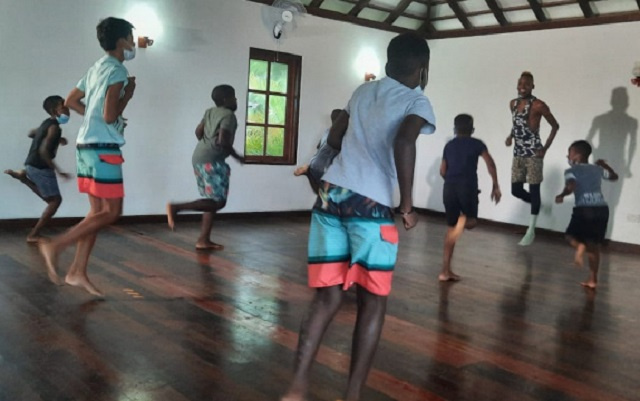 Dynott, who was formerly part of the English National Ballet, held classes mainly for boys aged between 6 to 33 years. (Seychelles Nation)

(Seychelles News Agency) - The Seychelles Institute for Culture, Heritage and the Arts (SICHA) is seeking to encourage boys to take up the art of ballet dancing and several classes were held last week by British professional ballet dancer Shevelle Dynott.

Dynott, who was formerly part of the English National Ballet, held classes mainly for boys aged between 6 to 33 years. The classes focused on the basics of ballet and Dynott described the participants as being very receptive and eager to learn.

"It was Patrick Muirhead [British journalist residing Seychelles] who asked me to come to Seychelles, La Digue, specifically. The aim was to get the boys interested in ballet, which is a dance a lot of people think is for girls," he said, after a meeting with the Mayor of Victoria, David Andre, on Saturday. Andre is also the secretary general of the SICHA.

The 36-year-old, who has danced all over the world, including for the Queen of England, said that they discussed a number of topics such as bringing ballet classes to Mahe in the future.

"The discussions with the mayor were very good and I think we are on the same page on many subjects and hopefully I can come back with more dances, just to inspire the young ones," said Dynott, adding that the arts are a catalyst for so many other skills.

During his visit, Dynott also got the chance to learn Seychelles' very own UNESCO-recognised traditional dance, the Moutya, which he said is a "great dance" and to be recognised on such a level is a positive for the dance form.

Meanwhile, the mayor spoke of the need to take advantage of such visits to improve Seychelles' networks through which more exchanges can be organised in the future.

Andre said that among other topics discussed was to have a ballet troupe come to Seychelles to not only hold classes but also put on a show to get more people interested in the dance.

Professional ballet came to Seychelles for the first time in 1986, when the Paris Opera Ballet arrived to perform "Gisèle" for the inauguration of the National Theatre at Mont Fleuri.

Later, the School of Dance was opened and Seychellois dancers were trained according to the syllabus of the Imperial Society of Teachers of Dancing from the UK.