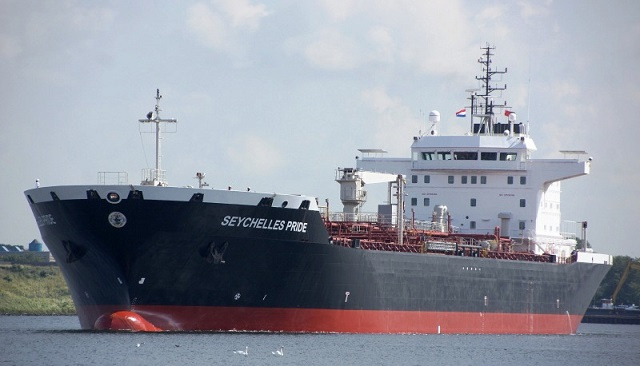 The sale of the tanker was concluded according to the Seychelles Petroleum Company's (SEYPEC) tanker replacement strategy. (Seychelles Nation)

(Seychelles News Agency) - Seychelles' first petrol tanker Seychelles Pride, purchased in 2002, was sold on January 12 without informing the government and is currently flying the Comoros flag.

The sale of the tanker was concluded according to the Seychelles Petroleum Company's (SEYPEC) tanker replacement strategy and all the proceeds associated with that sale have been received, the company's board confirmed in a statement on Wednesday.

SEYPEC's board of directors acknowledged that the government was not formally informed of Seychelles Pride's sale, a day after the Ministry of Finance, Economic Planning and Trade suspended the company's CEO Conrad Benoiton and ordered an investigation into the procedure of the sale.

On Tuesday, the finance ministry said that the government as the main shareholder of the SEYPEC, a state-owned enterprise, was not aware of the sale and asked the Public Enterprise Monitoring Commission (PEMC) to lead the investigation

Pending the conclusion of the probe, Sarah Romain, the company's general manager for commercial, has been appointed as acting CEO.

The SEYPEC board and the company's management said they will not be making any further comments on the matter. The finance ministry has also declined requests for interviews from the media until after the investigation is concluded.

According to ship tracking sites MarineTraffic.com and VesselFinder.com, the tanker travelled earlier this month from Romania's Port of Constanta in the Black Sea and arrived today in the Port of Suez in Egypt, flying the Comoros flag.

According to the Euronav website, a ship management company, the economic lifespan of an oil tanker has historically been 25 years, although more recently this has dropped closer to 20 years.

Seychelles Pride, a 178-metre long tanker, was the first deep-sea tanker launched in 2002 after the island nation started to invest in the business with the aim of vertical integration and creating an investment mechanism.

SEYPEC borrowed $158 million from KfW bank, the German government-owned development bank, which covered over 50 percent of the money needed. In 2017, the company paid off the loan taken from the German bank for its fleet of six oil tankers.

Most of the tankers, apart from Seychelles Paradise, known as the "green tanker" that serves the islands, call upon ports in the United States, Canada, South Africa and Europe. The bulk of their business is transporting Russian fuel into European ports such as Denmark, Netherlands, Belgium, France, Spain, Portugal, and the UK down to Italy.