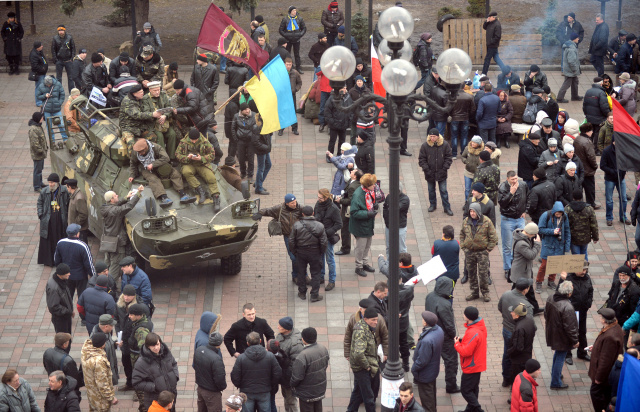 People sit on an armoured personnel carrier in front of the Ukrainian parliament during a rally in Kiev on February 27, 2014. Deposed Ukrainian president Viktor Yanukovych on February 27 said he still considers himself to be Ukraine's head of state but asked Russia to ensure his personal security. "I still consider myself to be the legal head of the Ukrainian state," said Yanukovych in a statement to Russian news agencies, his first comments since February 22. "I am compelled to ask the Russian Federation to ensure my personal security from the actions of extremists," he said, adding that the latest decisions by the Ukrainian parliament "do not have legitimate character." (AFP PHOTO/ SERGEI SUPINSKY)

(AFP) - Washington and Moscow's top diplomats meet Friday in Geneva in a last-ditch bid for a solution over Ukraine, with the United States increasingly fearing that Russia will invade despite warnings of severe reprisals.

The talks between Secretary of State Antony Blinken and Foreign Minister Sergei Lavrov come just 11 days after their deputies met in Geneva and agreed to preserve dialogue amid Russia's build-up of tens of thousands of troops on Ukraine's border.

Unlike the January 10 session, which lasted for nearly eight hours, Blinken and Lavrov are expected to have a concise exchange as they determine whether diplomacy remains possible.

Veteran diplomats who have encountered each other for years, Blinken is known for his unflappable calm and Lavrov for his mordant intensity.

They will meet at the lakeside luxury Hotel President Wilson, named for the US leader whose decisions included intervening against the Bolshevik revolution.

"These are difficult issues we are facing, and resolving them won't be done quickly. I don't expect we'll solve them in Geneva," Blinken said in Geneva.

"But we can advance our mutual understanding", Blinken said, and if Russia de-escalates on the ground, "that can turn us away from this crisis in the weeks ahead".

President Joe Biden bluntly assessed on Wednesday that his counterpart Vladimir Putin is likely to "move in" on Ukraine and warned of a "disaster for Russia".

The United States and its allies have warned of severe economic sanctions for an invasion.

Kremlin spokesman Dmitry Peskov responded that Biden's remarks were destabilising and could "inspire some hotheads in Ukraine with false hopes".

Russia, which already fuels a deadly insurgency in eastern Ukraine that has killed more than 13,000 people since 2014, has demanded guarantees that NATO never accept the former Soviet republic or expand otherwise in Moscow's old sphere.

The United States has declared the idea a "non-starter" and accused Russia of undermining Europe's post-Cold War order by bullying another country into submission.

Blinken headed to Geneva after a solidarity trip to Kyiv and talks with Britain, France and Germany in Berlin, the city that symbolised Europe's transformation from the divisions of the Iron Curtain.

"To allow Russia to violate those principles with impunity would drag us all back to a much more dangerous and unstable time, when this continent, and this city, were divided in two," he said, "with the threat of all-out war hanging over everyone's heads".

Even while rejecting the core Russian demands, the Biden administration has said it is willing to speak to Moscow about its security concerns.

One proposal by the United States is to revive restrictions on missiles in Europe that had been set by the Intermediate-Range Nuclear Forces Treaty, a Cold War deal trashed by former president Donald Trump's administration as it accused Moscow of violations.

The Biden administration has also offered more transparency on military exercises. Russia has not rejected the proposals but says that its core concern is Ukraine and on Thursday, announced massive naval drills in the Atlantic, Pacific, Arctic and Mediterranean as a show of force.

Blinken has called for Putin to choose the "peaceful path" of diplomacy and, hoping to find common ground, said that he will not hand a formal response to Lavrov on Russia's proposals, which were presented last month in unusual detail as draft treaties.

Lavrov and Blinken will both head after their meeting to the cameras for potentially duelling accounts of what transpired.

The United States has warned that the clock is ticking, putting forward intelligence alleging that an invasion could come shortly and be preceded by a "false-flag" operation as Russia tries to trigger a pretext against Ukraine.

General » Be a reporter: Write and send your article » Subscribe for news alert
Tags: Russia, Ukraine, conflict, US, talks

Finnish president, PM in favour of joining NATO 'without delay'