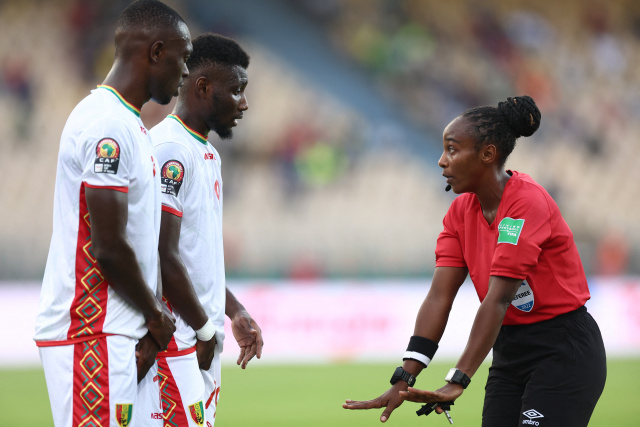 Rwandan referee Salima Mukansanga (R) gestures during the Group B Africa Cup of Nations (CAN) 2021 football match between Zimbabwe and Guinea at Stade Ahmadou Ahidjo in Yaounde on January 18, 2022. (Kenzo Tribouillard / AFP)

(AFP) - The first woman to referee an Africa Cup of Nations match is confident it will soon become normal to see a female official in charge at the biggest men's international tournament on the continent.

"This is a chance we have to start working hard and push. It's just the beginning and after this AFCON maybe the next one will be on another level," Rwanda's Salima Mukansanga told journalists in Douala on Friday.

She made history when she took charge of the Group B clash between Guinea and Zimbabwe in Yaounde earlier this week.

She was expected to be joined by two female assistant referees, Carine Atemzabong of Cameroon and Fatiha Jermoumi of Morocco.

However, when the officials entered the pitch for the match at the Stade Ahmadou Ahidjo in the Cameroonian capital, both assistant referees were males.

The previous 32 editions of the flagship African tournament from 1957 were refereed exclusively by men.

Previously Mukansanga was the fourth official when Guinea defeated Malawi on January 10 in Bafoussam.

"We are here not because of a favour or by chance but because we deserved to be here," she added at Friday's event organised by the Confederation of African Football.

"It's a privilege. It's a pleasure for me and other African women referees.

"It's an opportunity now to open the door and to show all women in Africa that they are capable and can reach that stage."