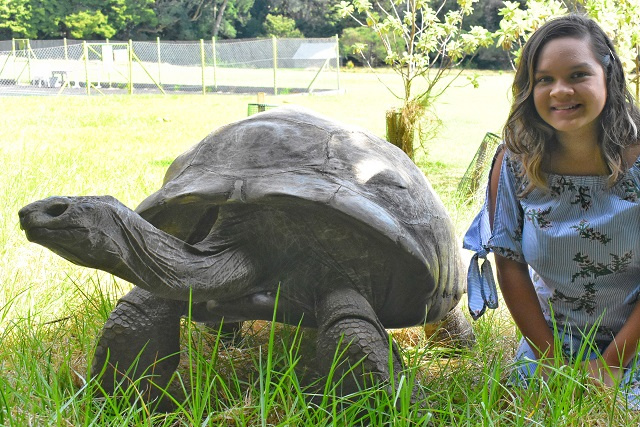 (Seychelles News Agency) - Jonathan, an endemic Seychelles land tortoise who currently lives on the island of St Helena in the Atlantic, has been named the "oldest tortoise ever'' by Guinness World Records.

According to the organisation's website, his official record title is oldest chelonian – a category which includes all turtles, terrapins and tortoises. He is also the oldest land animal.

Jonathan was transported from Seychelles in the Indian Ocean to St. Helena under the British administration in 1882 when he was approximately 50 years old, according to photographic evidence as well as scientific evidence such as his shell pattern.

St Helenian Jodie Scipio-Constantine told SNA that St Helena is planning to celebrate Jonathan's 190th birthday this year with a series of events and publicity.

Pending the celebration, Jonathan, who lives at Government House also known as Plantation House – one of St Helena's landmark historical attractions and the official residence of the governor – is being taken care of by a team of veterinarians.

"The Veterinary Section is still feeding him by hand once a week to boost his calories, vitamins, minerals and trace elements, as he is blind and has no sense of smell. He grazes well now but is unaware of food if we simply place it on the ground. His hearing though is excellent and he loves the company of humans," said Scipio-Constantine.

The governor of St Helena, Philip Rushbrook, said "It is a moment of pride for St Helena to be the home of the oldest recorded living land animal. Jonathan is much loved on St Helena and everyday people come to see him in his large paddock at Plantation House. To achieve the grand age of 190 years is an amazing achievement in itself but Jonathan is as lively and inquisitive as ever."

Rushbrook added that Jonathan lives with two younger males - David and Frederick and one female – Emma – all from Seychelles' Aldabra Atoll – a UNESCO World Heritage site, home to more than 100,000 giant land tortoises.

"Jonathan is always first to come across to meet his visitors. He is quite a character and seems to relish posing for the camera," added Rushbrook.

The governor added: "We would like to get another lady tortoise to improve the gender balance of the group. I recall the island enquired a couple of years ago with the Government of Seychelles to find out what might be possible."

The idea of removing giant land tortoises for their natural habitat is something that does not sit well with Seychelles' conservationists, however.

Antonio Constance, known locally as Mazaren, said in a previous interview with SNA that while he is delighted to hear of Jonathan as a world record holder, he felt sadness that the tortoise is so far away from its home.

"I am against the idea of giving away our endemic species including the giant land tortoises. They should be here or on Aldabra, roaming their habitat as nature intended," he said.

Mazaren added that people who want to see these fascinating creatures can simply visit the Seychelles – 115 islands in the western Indian Ocean.