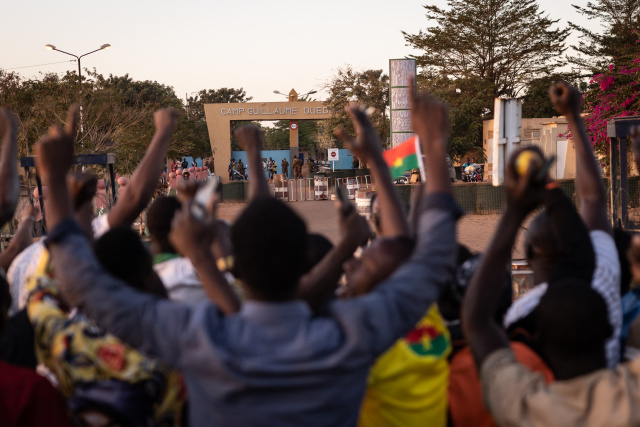 People gather at Nation square to celebrate and support the Burkina Faso military in Ouagadougou on January 24, 2022. Soldiers in Burkina Faso on January 24, 2022 announced on state television that they have seized power in the West African country following a mutiny over the civilian president's failure to contain an Islamist insurgency.
A junior officer announced the suspension of the constitution, the dissolution of the government and parliament, and the closure of the country's borders from midnight Monday, reading from a statement signed by Lieutenant Colonel Paul-Henri Sandaogo Damiba. (OLYMPIA DE MAISMONT / AFP)

(AFP) - Supporters of Burkina Faso's new ruling junta were set to rally on Tuesday as France and the UN condemned the West African country's latest coup.

Officers detained President Roch Marc Christian Kabore in the volatile state on Monday amid deepening anger at his handling of a jihadist insurgency.

The country now lies in the hands of the Patriotic Movement for Preservation and Restoration (MPSR), the name of a junta led by Lieutenant-Colonel Paul-Henri Sandaogo Damiba.

Dozens of people gathered at Nation Square in the heart of the capital Ouagadougou on Tuesday ahead of a rally aimed at showcasing support for the junta.

"Our tears are now going to stop. We ask the military, in whom we have trust, to work together to restore peace in Burkina Faso," said one man, Amado Zoungrana.

On Monday night, a statement signed by Damiba announced the suspension of the constitution, the dissolution of the government and parliament and the closure of the country's borders from midnight.

The MPSR would re-establish "constitutional order" within a "reasonable time," the statement said, adding that a nationwide 9:00 pm to 5:00 am curfew would be enforced.

Despite the latest turmoil, life in Ouagadougou seemed to continue as normal on Tuesday.

The city's main market, shops and petrol stations were open, and there was no particular military presence in the centre, an AFP journalist saw.

West Africa has been rattled by three military coups in less than 18 months, beginning with Mali in August 2020 and Guinea in September 2021.

It is the latest bout of political turmoil to strike Burkina Faso, which has had little stability since gaining independence from France in 1960.

"We call on the military to immediately release President Roch Marc Christian Kabore and other high-level officials who have been detained," the office's spokeswoman, Ravina Shamdasani, told reporters in Geneva.

"We urge a swift return to constitutional order."

France has committed thousands of troops to shoring up its former colonies Burkina Faso, Niger and Mali -- three of the world's most impoverished countries -- in the face of a brutal jihadist offensive.

On Monday, West African states in the ECOWAS bloc described the volatility as a "coup attempt" and held "soldiers responsible for (Kabore's) physical well-being".

The national TV channel RTB late Monday published on social media a handwritten letter that it said was written by Kabore, purportedly saying that he was stepping down "in the higher interests of the nation".

The letter could not be independently verified.

The whereabouts of Prime Minister Lassina Zerbo and other senior officials are also unknown.

The junta said "the operations (to overthrow Kabore) unfolded without bloodshed and without any physical violence towards the persons arrested, who are being held in a secure place with respect for their dignity".

Around 2,000 people have died, according to an AFP tally. In a country of 21 million, some 1.5 million people are internally displaced, according to the national emergency agency CONASUR.

Bloody attacks on the army, police and a volunteer civilian militia mounted throughout 2021, and accounts of negligence or indifference by top commanders sparked particular anger.

Damiba is commander of the 3rd Military Region, which covers eastern Burkina Faso -- one of the worst-hit areas.

The following day, troops began to mutiny in numerous barracks, and on Monday Kabore was toppled.

Kabore was elected in 2015, pitching himself as a beacon of hope after the long reign of strongman Blaise Compaore, who came to power in a putsch in 1987.

That takeover saw the assassination of Burkina's revered revolutionary leader, Thomas Sankara -- a death whose pall remains over the nation today.

Kabore's MPP party and the country's political opposition have yet to react to events.