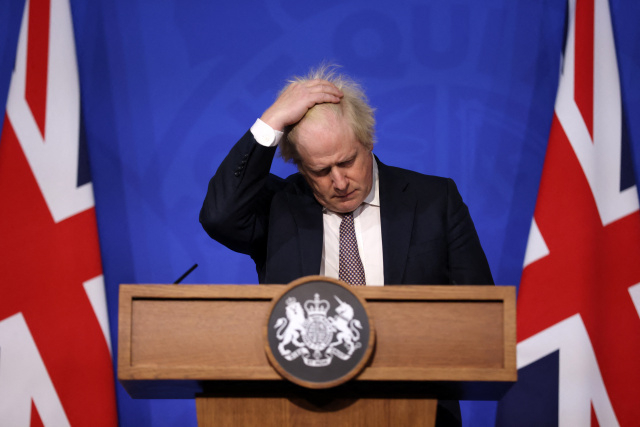 The report from an investigation by senior civil servant Sue Gray is complete, but has not yet been submitted to Downing Street, the government said.

The explosive confirmation that London's Metropolitan Police force has now started its own investigation could complicate the release of Gray's report, but opposition parties insisted on its publication in full.

Otherwise, according to senior Labour MP Chris Bryant on BBC radio, the public will "simply say this is a cover up".

Foreign Secretary Liz Truss affirmed her "100 percent" backing for Johnson despite the likelihood that he will become only the second prime minister, after Tony Blair, to face police questioning in office.

Truss, speaking to BBC television, said all sides should be more focused on issues such as Russia's threats to invade Ukraine.

But she acknowledged: "There clearly has to be a change of culture. The prime minister has said that mistakes were made, he's apologised for what has happened."

"I suspect we won't have much longer to wait for the Sue Gray report, where we can have a fuller view of exactly what happened," she added on BBC radio.

It was unclear whether Downing Street would release the report on Wednesday or later, with Johnson facing another grilling in parliament at the weekly joust of Prime Minister's Questions from noon (1200 GMT).

Gray, described as an iron-willed enforcer of probity in government, has been investigating revelations that Downing Street staff held frequent parties over the past two years while the rest of the country was in lockdown.

Johnson -- the populist architect of Britain's Brexit split from the EU -- has faced public outrage over the parties.

The prime minister attended several events, including a crowded gathering held for his birthday in June 2020 at a time when indoor socialising was banned.

Many on social media have highlighted how they missed significant life events themselves out of respect for social distancing rules, and were unable to comfort sick and dying loved ones struck down with Covid.

A tweet from Johnson re-emerged from March 2020 in which he told a seven-year-old girl that she was setting a "great example to us all", after she cancelled her own birthday party.

At least seven backbench Conservative MPs have called publicly for Johnson's resignation. A total of 54 letters are required to trigger a party vote of no confidence.

But cabinet ally Jacob Rees-Mogg warned wavering Tories that any successor would face strong pressure to call a snap election -- a perilous step with Labour surging to a double-digit in opinion polls.

"It is my view that we have moved, for better or worse, to essentially a presidential system," he told BBC television.

"And that therefore the mandate is personal rather than entirely party, and that any prime minister would be very well advised to seek a fresh mandate."