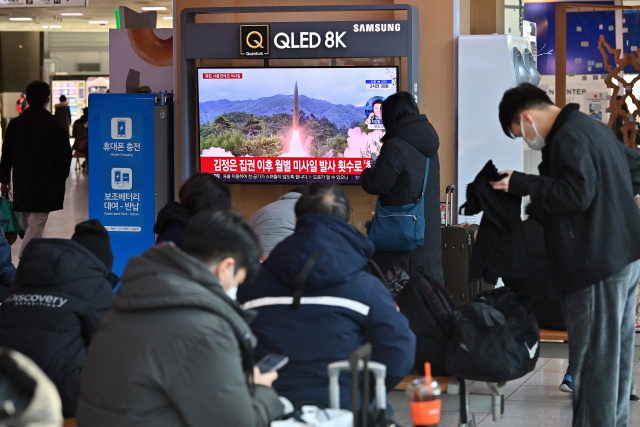 People watch a television screen showing a news broadcast with file footage of a North Korean missile test, at a railway station in Seoul on January 30, 2022, after North Korea fired a "suspected ballistic missile" in the country's seventh weapons test this month according to the South's military. (Jung Yeon-je / AFP)

(AFP) - North Korea on Sunday tested its most powerful missile since 2017, ramping up the firepower for its record-breaking seventh launch this month as Seoul warned nuclear and long-range tests could be next.

Pyongyang has never test-fired this many missiles in a calendar month before and last week threatened to abandon a nearly five-year-long self-imposed moratorium on testing long-range and nuclear weapons, blaming US "hostile" policy for forcing its hand.

South Korea said Sunday that North Korea appeared to be following a "similar pattern" to 2017 -- when tensions were last at breaking point on the peninsula -- warning Pyongyang could soon restart nuclear and intercontinental missile tests.

South Korea's military said Sunday it had "detected an intermediate-range ballistic missile fired at a lofted angle eastward towards the East Sea".

The missile was estimated to have hit a maximum altitude of 2,000 kilometres (1,200 miles) and flown around 800 kilometres for half an hour, Seoul's Joint Chiefs of Staff said.

A lofted trajectory involves missiles being fired at a high angle instead of out to their full range.

"So this would imply today's test involves one of those missile types -- or potentially something new. In other words, a big deal."

The last time Pyongyang tested an intermediate-range missile was the Hwasong-12 in 2017, which analysts said at the time was powerful enough to put the US territory of Guam in range.

Japan's top government spokesman Hirokazu Matsuno said Sunday that the ballistic missile "was one with intermediate-range or longer range".

The United States condemned the launch, with a State Department spokesperson saying it was a "clear violation" of multiple UN Security Council resolutions.

Pyongyang has tested hypersonic missiles twice this month, as well as carrying out four launches of short-range ballistic and cruise missiles.

Washington imposed fresh sanctions over the tests, prompting Pyongyang to vow a "stronger and certain" response to any attempt to rein it in.

"Kim has been withholding his appetite for testing and provocations," Soo Kim, an analyst at the RAND Corporation, told AFP.

Now, however, "the time is ripe, and North Korea's continued missile firing will only throw another wrench into Washington's already high plate of foreign policy challenges", she added.

The frenzy of missiles aims to remind the world that "the Kim regime hears external discussions of its domestic weaknesses", said Leif Easley, a professor at Ewha University.

"It wants to remind Washington and Seoul that trying to topple it would be too costly."

The string of launches in 2022 comes at a delicate time in the region, with Kim's sole major ally China set to host the Winter Olympics next month and South Korea gearing up for a presidential election in March.

Domestically, North Korea is preparing to celebrate the 80th anniversary of the birth of late leader Kim Jong Il in February, as well as the 110th birthday of founder Kim Il Sung in April.