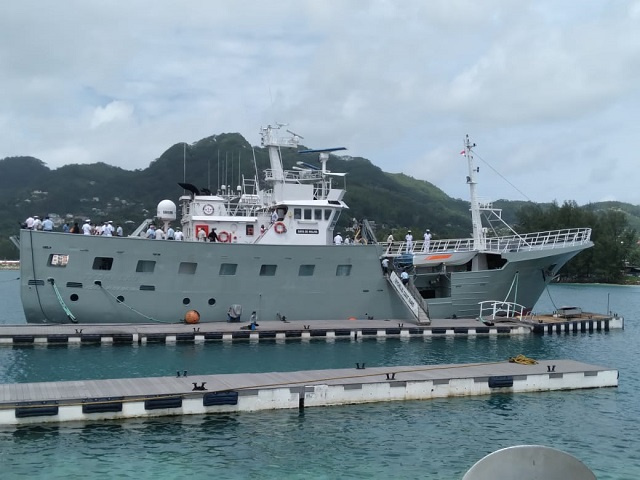 (Seychelles News Agency) - The Seychelles Coast Guard (SCG) received a supply vessel from the head of a Spanish tuna fishing company on Saturday.

The vessel, Saya de Malha, was officially handed over to President Wavel Ramkalawan, who is the commander- in-chief of the Seychelles Defence Forces, by Arrien Guillermo, the president and general manager of Inpesca Fishing, a Spanish group operating in the Atlantic and the Indian Ocean.

This is the first time that a foreign privately-owned company donates a vessel to the defence forces, in cooperation with a local shipping firm - Seaward Company. According to its website, Inpesca has four purse seiners fishing in the Indian Ocean, including Seychelles' waters, as well as two supply vessels assisting them.

In his address, Ramkalawan said that the supply ship is beneficial to the country as it will help the coastguards in its mission to fight illegal fishing in the Seychelles Exclusive Economic Zone of 1.4 million square kilometres.

The chief of defence forces, Brigadier Michael Rosette, said that the vessel will be used in a multitude of supporting roles for the coast guard and contribute to extending the reach of Seychelles' maritime forces.

"With its capabilities, the SCG will be able to effectively replenish its various out-stations on the outer islands, refuel and replenish its patrol vessels at sea and better assist local authorities like the Seychelles Fishing Authority in dealing with illegal, unreported and unregulated fishing (IUU) fishing, as well as the police with counter-narcotics and other law enforcement operations at sea, and even contribute to humanitarian assistance and disaster response (HADR) operations within the region," said Rosette.

The commanding officer of the Seychelles Coast Guard, Colonel Jean Attala, told SNA that prior to owning a supply vessel, the coast guard would go to the outer islands to collect supplies.

"With Saya de Malha forming part of our fleet, we will also be able to help countries in the region should they be facing a natural disaster by transport of relief supplies," he added.

Retired coast guard officer Simon Laurencine has returned to the maritime force and been given the responsibility of commanding the vessel with four other officers and 13 sailors.

According to the coast guard tradition of naming its vessel, Saya de Malha is named after a plateau located 362 nautical miles southeast of Mahe, the main island of the archipelago in the western Indian Ocean.

The last vessel that the coast guard received was the PS Zoroaster from the Indian government in April 2021.

According to State House, they discussed ways in which "the ship-owners can further assist Seychelles with maritime resources such as a vessel either for use during maritime training or for research purposes."