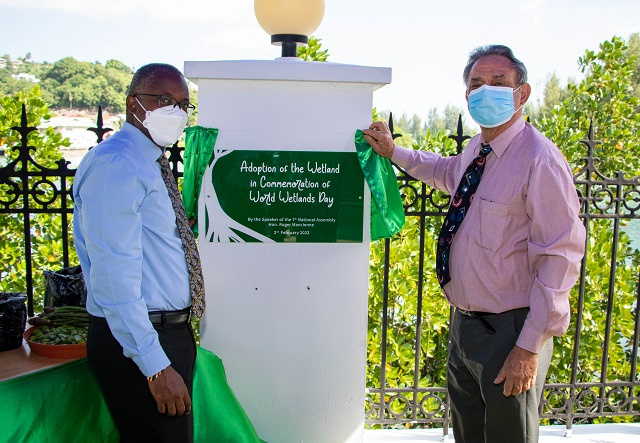 The parliament, located on the reclaimed island of Ile du Port, adopted the wetland area behind its building. (National Assembly)

(Seychelles News Agency) - With reforestation and increasing biodiversity at the core of its objectives, the National Assembly of Seychelles adopted part of a wetland area on the outskirts of the island nation's capital, Victoria, on Wednesday.

To commemorate World Wetlands Day on February 2, the parliament, located on the reclaimed island of Ile du Port, adopted the wetland area behind its building, which is home to the red mangrove or 'mangliye rouz' as it is known in Creole, one of seven mangrove species native to Seychelles.

The speaker of the National Assembly, Roger Mancienne, and the deputy speaker, Gervais Henri planted the first mangrove seedlings that will later be transferred to the wetland.

Mancienne outlined that other than managing and protecting the area for future generations, the institution also wants to reforest the area to increase its biodiversity.

Once this is done, the area will become home to more wildlife species.

"We want to introduce another species of mangrove - the white mangrove - in the area. Experts have told us that this species is important for the reinforcement of the area's stability," said Mancienne.

Mangrove wetlands are important to an ecosystem and communities, as they act as nurseries for different fish species, prevent coastal erosion, prevent sediments from entering the sea and contribute greatly to reducing the effects of climate change.

Ile du Port is a reclaimed island covering an area of 50.2 hectares and this island and Mahe, the main island, there is a stretch of about 80 metres of wetland dominated mostly by bare mudflats and scarce patches of mangrove trees.

Is development an 'enemy' to wetlands?

According to a 2018 report for the UN titled "Physical Alteration and Destruction of Habitats" on Seychelles written by Dr Rolph Payet - a former environment minister and current executive secretary of the Basel Rotterdam and Stockholm Conventions (BRS) - over 200 years of development and human intervention in the island nation has diminished the coverage area of what used to be thick mangrove wetlands fringing most coasts.

There are fears that new developments along the coastline will threaten wetlands and species they sustain.

Last year, local environmentalists held a protest to express concern that the development of a 120-room hotel at Anse a la Mouche on Mahe will destroy the wetland area found on the site of the project.

The environment minister told SNA that his team is making regular visits to the site and working closely with the developers to ensure that the wetland area does not shrink in size.

"As work continues, certain things will happen - soil and mud will be moved. As with any development, we know that the form of the area might change, but the importance is that we do not lose the wetland," said Joubert.

He added that in due time, rehabilitation work will be carried out on the wetland, which will regain its former state and function.

"We have seen this in many projects, where wetlands were impacted and later regained their former glory," said the minister.

A hotel existing in harmony with surrounding wetlands can be seen at the Constance Ephelia Resort, located at Port Launay. The resort, which was built within mangroves, has been committed to preserving the site and works with the local community and an environmental NGO on this.

Today, all of the seven species of mangroves native to Seychelles, a group of 115 islands in the western Indian Ocean, can naturally be found in the wetland of Port Launay.