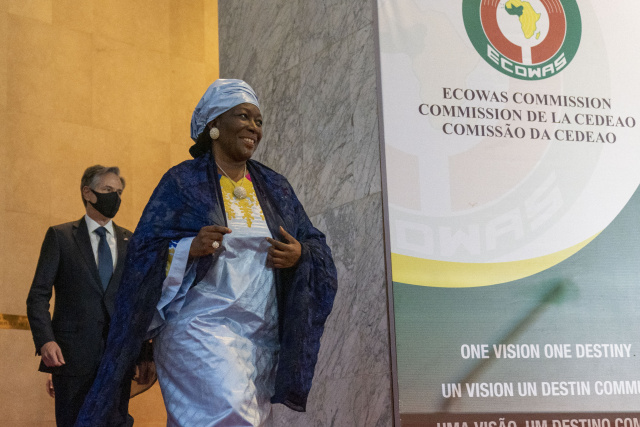 ECOWAS (Economic Community of West African States) Commission Vice President Finda Koroma (R) and and US Secretary of State Antony Blinken (L) take the stage for a speech on US Africa Policy at the Economic Community of West African States in Abuja, Nigeria, on November 19, 2021. Blinken is on a five day trip to Kenya, Nigeria, and Senegal. (Andrew Harnik / POOL / AFP)

(AFP) - West African leaders hold a key summit on Thursday as a wave of coups buffet a region struggling with poverty and a long history of turbulence.

Emergency talks in the Ghanaian capital Accra were triggered after Burkina Faso on January 24 became the third member of the 15-nation Economic Community of West African States (ECOWAS) to be overtaken by the military in less than two years.

Burkina followed Mali, where a coup in August 2020 was followed by a second in May 2021, and Guinea, where elected president Alpha Conde was ousted last September.

Adding to the region's turmoil was a gun attack on Tuesday on the president of Guinea-Bissau, Umaro Sissoco Embalo, stoking fears that years of efforts to steer West Africa towards stability and democracy are failing.

Thursday's one-day meeting, scheduled to start at 1000 GMT, will assess the outcome of two missions to Burkina following the coup.

Burkina was suspended from ECOWAS after rebel soldiers arrested President Roch Marc Christian Kabore amid public anger at his handling of a jihadist insurgency.

The question now is whether the country -- ranked a wretched 182nd out of 189 countries in the UN's worldwide development index -- will escape economic punishment.

ECOWAS has already slapped crippling sanctions on Mali and Guinea for dragging their feet on commitments to restore civilian rule.

Those measures have included the closure of borders by ECOWAS members, an embargo on trade and financial transactions and sanctions against individuals.

The sanctions prevented Mali honouring its latest bond payments, a move that could, potentially, mark the first step towards a default on its debt.

Military chiefs from ECOWAS flew to Ouagadougou on Saturday for talks with the junta, and this was followed on Monday by a diplomatic mission led by Ghana's foreign minister, Shirley Ayorkor Botchwey.

Early reactions from the envoys have been positive.

"They seemed very open to the suggestions and proposals that we made. For us it's a good sign," Botchwey told reporters after meeting with strongman Lieutenant-Colonel Paul-Henri Sandaogo Damiba and other junta members.

The talks were attended by the UN's special representative for West Africa and the Sahel (UNOWAS), Mahamat Saleh Annadif, who described a "very frank exchange".

The delegation notably met Kabore, whose wellbeing and demands for release from house arrest are major issues.

During the visit, the junta declared it had restored the constitution, which it had swiftly suspended following the coup, and named Damiba as president and head of the armed forces during a transition period.

And on Tuesday, Damiba met political party chiefs, many of whom said they were keen to take part in the restoration of civilian rule.

But major questions remain unanswered, including the key issue of a date for elections. On January 24, the junta vowed to re-establish "constitutional order" within a "reasonable time".

In deciding whether to impose sanctions, ECOWAS leaders have to balance the credibility of their organisation against the fragility of some of their states, especially in the Sahel.

Mali and Burkina Faso are in the throes of a nearly decade-old jihadist emergency that has claimed thousands of lives and forced at least one and a half million people from their homes.

Escalating political friction with the junta in Mali has driven Bamako closer to the Kremlin and cast a shadow over France's anti-jihadist mission in the country.

On Wednesday, the Malian government warned of the risk of sanctions triggering a wider crisis. It said the restrictions imposed on it in January by ECOWAS and the region's economic and monetary union (WAEMU) had prevented it honouring its latest bond payments.

In a statement that sought to reassure its investors, the junta in Bamako said it had the necessary funds in its coffers but the regional issuing bank, the Central Bank of West African States, had refused to allow the payment.