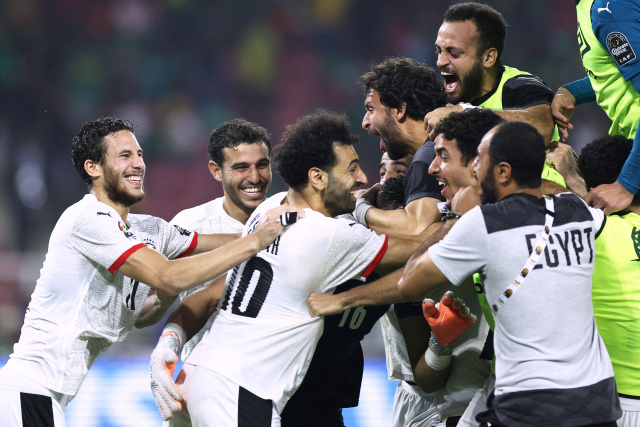 Egypt's players celebrate after winning the Africa Cup of Nations (CAN) 2021 semi-final football match between Cameroon and Egypt at Stade d'Olembe in Yaounde on February 3, 2022. (Kenzo Tribouillard / AFP)

(AFP) - Mohamed Salah's Egypt are through to the final of the Africa Cup of Nations after beating hosts Cameroon 3-1 on penalties at the end of a goalless 120 minutes in Yaounde on Thursday.

Goalkeeper Mohamed Abou Gabal was the Egyptian hero, saving from both Harold Moukoudi and James Lea-Siliki in the shoot-out at the Olembe Stadium before Clinton Njie blazed wide with Cameroon's last chance to keep their dream alive.

Salah, usually the fifth penalty-taker for his country, was not needed as Egypt advance to a final showdown against Senegal back at the Olembe Stadium on Sunday.

That will see Salah come up against his Liverpool teammate Sadio Mane, with the Pharaohs chasing a record-extending eighth African crown while Senegal continue their search for their first title.

"We are very proud of our achievement today but there is one more step to go," said Egypt assistant coach Diaa al-Sayed, speaking after coach Carlos Queiroz was sent off during the match.

Cameroon see their hopes of AFCON glory on home soil ended in cruel fashion, and they must still get through a third-place play-off against Burkina Faso this weekend.

"We are sad, and so are 27 million Cameroonians, but that's football," said coach Toni Conceicao.

Just 10 days had passed since the disaster at the stadium, when eight people were killed and 38 injured prior to Cameroon's last-16 win against the Comoros.

The Confederation of African Football had temporarily shut the venue pending an investigation into the events, stripping it of a quarter-final before giving it the green light to reopen here.

Many fans were clearly put off returning to Olembe so soon after the tragedy, with just 24,371 present in the 60,000-seat venue -- many more could have attended even with Covid restrictions limiting crowds to 80 percent of capacity.

The lack of fans was a shame in what is a football-mad country, and Cameroon and Egypt are the two most successful sides in Cup of Nations history -- the Indomitable Lions' tally of five titles is bettered only by the Pharaohs.

The Egyptians had a score to settle as they sought revenge for their 2-1 defeat at the hands of the Indomitable Lions in the 2017 final, when Vincent Aboubakar came off the bench to score the winner.

An impact substitute then, Aboubakar is now Cameroon's captain and the top scorer at this tournament with six goals.

So confident was he before this game that he dismissed the threat of Salah in a radio interview, and the Egyptian captain was peripheral here, too often an isolated figure on the right wing.

He did, however, pass up a glorious chance to open the scoring early in the second half when a dreadfully short back-pass by Martin Hongla sent him clear. Cameroon goalkeeper Andre Onana came out to make the save.

Aboubakar also struggled to make an impact, although the hosts had dominated the first half and almost went ahead in the 18th minute when Michael Ngadeu rose to head a corner off the woodwork.

Samuel Oum Gouet also saw a long-range piledriver clip the left upright in the second half.

Meanwhile the Egyptians went down at every opportunity, regularly looking to eat up time and frustrate their opponents.

Usually they eventually stood up again unscathed, and they ended the game with 11 players but coach Queiroz –- who was already missing one of his assistants to a ban -- was shown a red card at the end of normal time for losing his temper on the touchline.

This was Egypt's third extra time in as many knockout ties, after they needed penalties to beat the Ivory Coast in the last 16 and an extra half-hour to overcome Morocco in the quarter-finals.

Extra time passed with penalties always seeming inevitable, and Aboubakar was the only successful taker for Cameroon as they go out.