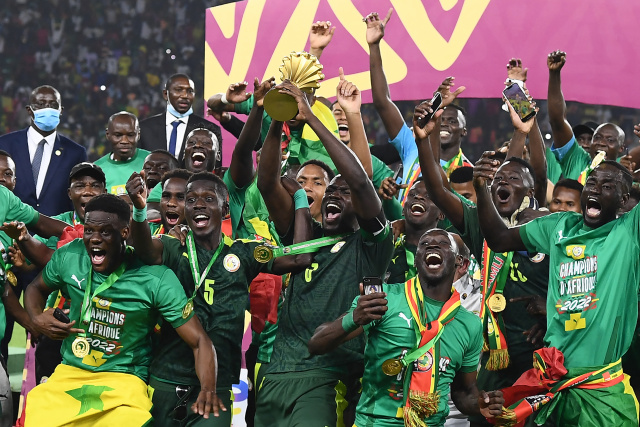 Senegal's players celebrate with the trophy after winning the Africa Cup of Nations (CAN) 2021 final football match between Senegal and Egypt at Stade d'Olembe in Yaounde on February 6, 2022. (CHARLY TRIBALLEAU / AFP)

(AFP) - Sadio Mane made up for a first-half penalty miss by converting the winning spot-kick in a shoot-out as Senegal defeated Egypt to win a maiden Africa Cup of Nations title on Sunday.

The two sides were locked at 0-0 after extra-time in the final but Liverpool star Mane held his nerve in the shoot-out which his team won 4-2.

Mane had squandered the chance to put Senegal ahead inside seven minutes in Yaounde when his penalty was saved by Egypt goalkeeper Mohamed Abou Gabal.