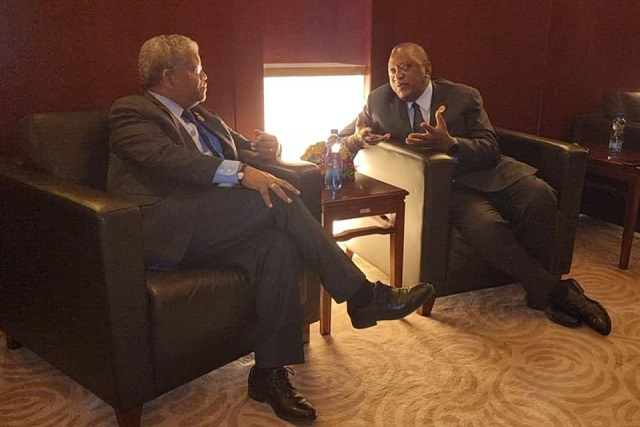 (Seychelles News Agency) - Seychelles' President Wavel Ramkalawan has invited the President of Kenya, Uhuru Kenyatta, for an official visit to Seychelles in a meeting on Saturday.

According to a press release, Ramkalawan – who returned to Seychelles on Monday morning – held bilateral talks with Kenyatta to discuss cooperation between their countries on the sidelines of the AU summit for heads of state and government, which ended on Sunday in Addis Ababa.

They spoke about future collaboration in maritime security, military exchanges, agriculture, the Blue Economy, tourism and training of nurses.

While in Ethiopia, Ramkalawan also met with the President of Cape Verde, José Maria Neves, to exchange views on island matters as both are leaders of small island states.

During the meeting, Seychelles' President was invited to visit Cape Verde later this year.

They also spoke about the negative effects of COVID-19 on the tourism industry, which is the top pillar of Seychelles' economy.

Seychelles, an archipelago in the western Indian Ocean, is considered a pioneer in the Blue Economy – the sustainable exploitation of ocean resources.

The island nation has undertaken several initiatives in this field including the Debt-to-Adaptation Swap, whereby repayment of an international debt of $21 million was cancelled in exchange for investment in the Blue Economy.

Diplomacy » Be a reporter: Write and send your article » Subscribe for news alert
Tags: AU Summit