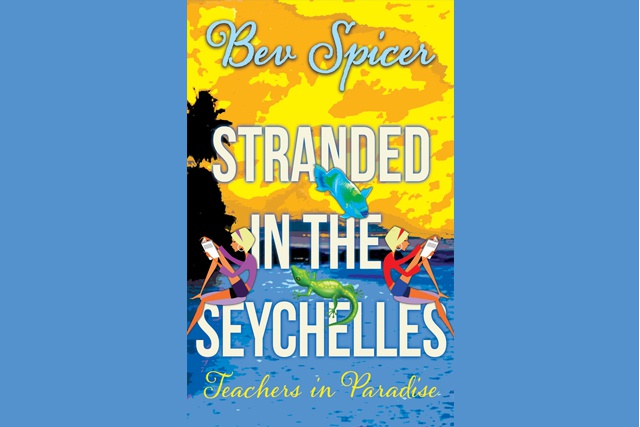 (Seychelles News Agency) - Earlier this year a humorous memoir titled Stranded in Seychelles: teachers in paradise was published about a British teacher working for the National Youth Service in the late 1980s. SNA’s Hajira Amla interviews author Bev Spicer and together they re-live memories of white-knuckle bus rides, gigantic spiders and a general lack of milk and potatoes.

Seychelles in the late 1980s may evoke a mixture of vivid memories for many. Having roughly stumbled from post-colonial independence into a one-party socialist regime, the largely agricultural remote archipelago of 115 islands in the western Indian Ocean was taking its first tentative steps into transforming into a more developed country.

It was into this scene that a young British teacher entered, having been recruited in 1987 to teach in the somewhat controversial compulsory National Youth Service schooling system. Captivated by the unspoiled beauty of the islands but also experiencing culture clash and some terrifying moments, Bev Spicer’s droll sense of humour found the bright side of many of these situations.

Fun-loving, irreverent and still a little wet behind the ears, Bev encountered people, natural surroundings and a way of living life that frustrated, fascinated and horrified her in equal measure.

After finding a surprising clause in her teaching contract that forbade her from travelling anywhere outside Seychelles besides Mauritius to be very disagreeable to her adventurous spirit, she left Seychelles after only six months.

Around two decades later, Bev decided to write a series of books about her many tall tales of her wild and carefree youth, first as a blackjack dealer in the London Playboy casino in the early eighties, then about her sojourn in France during a three-month study break in 1979, and finally the most recent book in the series about her experiences of teaching in the Seychelles.

Although the books are written in a humorous memoir-style and are largely based on her real-life experiences, Bev admits that many of the stories have been liberally embellished with dollops of fiction for dramatic effect, and many of her characters are also fictional.

I noticed that some statements were a little too dramatic to be true, such as mentions of waters infested with man-eating sharks, the imaginary volcanic origins of the islands, and a somewhat frightening lack of understanding of Creole people and their culture, but I slowly realised that the book had been written in good faith merely as a comical account of the author’s own misadventures in a time gone by.

This understood, I was ready to enjoy the humour the book had to offer and spent the day laughing maniacally at crazy stories of alcohol-fuelled parties, bizarre friends, lizards, centipedes, ants, spiders, a comical but terrifying bus journey, an ancient motorcycle and the apparent enjoyment of weevil-infested corn flakes soaked in orange juice instead of milk.

After finishing the book, I got in touch with Bev Spicer to find out more about her and Stranded in Seychelles: teachers in paradise.

SNA: Can you start off by explaining a bit about the Bev and Carol series in general and why you decided to write them?

Bev Spicer: Like most things in my life, Bev and Carol were sort of accidental. I was talking to a friend who also writes, and when she found out I had worked at a London Playboy casino as a croupier in the early 80s, she said I would be mad not to write about it. People would be interested to know what it was really like dealing blackjack in the not so glamorous world of Playboy. That was the beginning of Bev and Carol, two friends with larger than life personalities and not a great deal of common sense.

SNA: Stranded in Seychelles is a very tongue-in-cheek look at the islands back in the late 1980s - what would you want Seychellois readers to know before they pick up the book?

Bev Spicer: Glad you asked this one! Stranded in the Seychelles, like all the books in the Bev and Carol series, is meant to be entertaining but also interesting. Hopefully, readers will see that the laugh is generally on one or other of the protagonists rather than at the expense of other characters who appear in the books.

The portrayal of Seychelles is from the point of view of two young women who are exploring a new and exciting culture where, for the first time in their lives, they are exposed to a society which is evolving at a fantastic rate.

There are aspects of Seychellois life that Bev and Carol find charming, laudable, refreshing and, at the same time, they come across social practices that test their moral and political yardsticks, sometimes leaving them baffled or overwhelmed.

During their time on the islands, Bev and Carol are delighted, challenged and terrified in turn.  Above all, I hope that the deep affection and pride I felt for Seychelles and its people will come through loud and clear.

SNA: What kind of person was Bev Spicer in those days?

Bev Spicer: Incorrigible, unstoppable, dozy, blonde, less wrinkly, and on the lookout for adventure. I remember never wanting to settle in one place for too long because I might miss something. The world seemed like a huge treasure chest and I wanted to dive in and pull out as much sparkle as I could. I suppose I was lucky to have received a free university education, trained to be a teacher and to have had a father who only wanted me to follow my heart and be happy. And so, in those days, I was a traveller first and foremost.

I’ve lived in a lot of different countries and feel privileged to have encountered so much that is new to me.  Wherever I have been, I’ve always found amazing people, who smile no matter what life throws at them. I had very little in terms of possessions in those days. I felt free and unafraid of the future.

SNA: Have you been back to the Seychelles since your departure from the NYS? If so, what can you say about how the islands and the people have changed since then?

Bev Spicer: No, I’ve never thought about returning. Do you know how rich you have to be to holiday in the Seychelles? I’m so pleased to have found your site, though. Now I can keep up with what’s happening at the click of a button. Amazing!

SNA: You say that the book is partly fictional and partly a true account of your experiences in Seychelles - what parts of the book have been embellished with fiction and why?

Bev Spicer: Now this is a very leading question!  I would say that practically all of the events are based on my own experiences, with the occasional exaggeration for dramatic effect.  Fiction comes into play with the characters, who have been made as unrecognisable as possible from the real people I met.  ‘Carol’ is an entirely fictional character in all of the books.

The person who accompanied me to France, London and Seychelles, was nothing like Carol. What is absolutely real, and what I have endeavoured to convey is the profound and treasured friendship that comes from knowing someone well and enjoying their company in a way that is effortless and genuine.  I sometimes think that Bev and Carol are probably more like two sides of my own rather strange personality.

Bev Spicer is now married and lives in France with her husband and teenage sons, and though her days of binge-drinking are long over, she claims that a glass of wine consumed with dinner is unavoidable in France. A self-published author, her books are available in e-book format and paperback on Amazon. Aside from her three humorous memoirs, she has published other novels and short stories in various genres.

The Q&A interview has been edited and condensed by the editorial team.

The Interview » Be a reporter: Write and send your article » Subscribe for news alert
Tags: Bev Spicer, author, novel