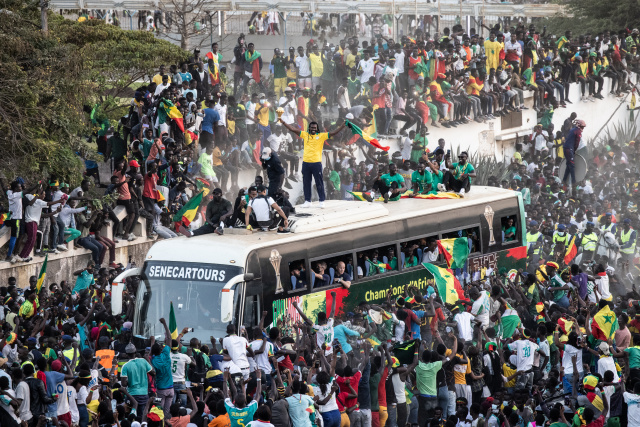 (AFP) - Senegal arrived home on Monday after winning the Africa Cup of Nations, to hundreds of thousands of ecstatic and chanting fans, AFP journalists saw.

Massive crowds of supporters descended on a military airport in the West African country's capital Dakar, blowing vuvuzelas and waving flags, to celebrate the victory.

President Macky Sall was waiting at the airport to greet the returning players, who then paraded through thronged streets sitting on top of a bus, on their way to the presidential palace.

The victory marked Senegal's first success in the tournament, and sparked jubilant celebrations across the capital city of three million people on Sunday evening which continued on Monday.

The government had declared Monday a public holiday in order to celebrate the occasion.

"This is an unforgettable moment that will last forever," said Die Mbaye, a 17-year-old school student near the presidential palace, who was scarcely audible above the shouts of supporters.

Sporting a Senegal jersey, and with a flag sticking from her hair, Mbaye added: "We deserved it, we have been waiting for 60 years."

Mamadou Bocoum, a 24-year-old student standing nearby, was equally enthusiastic. "Our life is going to change," he told AFP.

Such an intense outpouring of emotion has not been seen for years in Senegal, a Muslim-majority nation of 17 million people that is better known for its reserved culture.

Senegal have competed in the Africa Cup of Nations for over fifty years and have reached the final twice -- but The Lions of Teranga never clinched the ultimate prize until Sunday.

Africa's top-ranked national team and 20th in the world lost the last Cup of Nations final in 2019, falling 1-0 to Algeria in Cairo.

They also lost the 2002 final on penalties to Cameroon, a few months before becoming one of just three African teams to reach a World Cup quarter-final.

"It's the best day of my life," Mane said after winning.

"I'm living a dream. I can't believe it. The wait was long but finally we did it. We are all happy and proud to win this trophy."

The victory comes as welcome respite in Senegal, which suffered pandemic-related economic woes and where lethal riots linked to political tensions rocked the country last year.

On Monday, crowds of celebrating supporters began to gather on the streets of Dakar hours ahead of the national team landing at the airport.

President Sall cancelled a trip to the archipelago nation of the Comoros in order to greet the team at the airport.

The 60-year-old president also invited his staunch political opponents to the welcome ceremony.

"There are times when you leave aside problems to talk about the common cause of the country," he said in a speech after the team touched down.

"Now you are at the summit of Africa," he said.