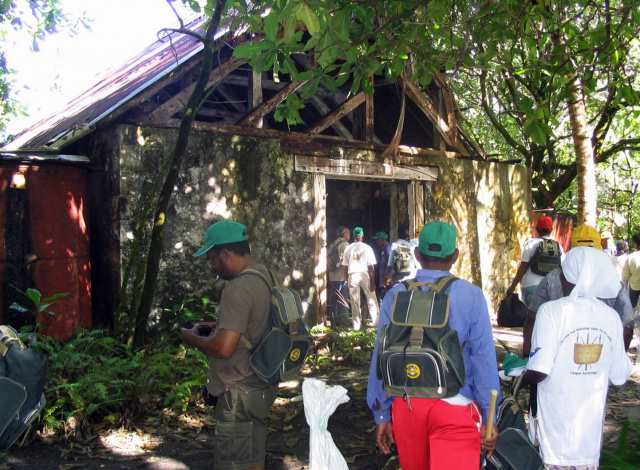 Chagosians check their run-down church on Peros Banos Island 10 April 2006. Some 102 Chagosians who were evicted from the idyllic Indian Ocean archipelago by Britain in the 1960's and 1970's, arrived on April 4 for a brief trip which took them to three islands, Diego Garcia, Peros Banos and Salomon, in the chain which has been the subject of bitter diplomatic and legal disputes since Britain claimed it in 1965. About 2,000 Chagosians were expelled and sent to live mainly in Mauritius and the Seychelles where only about 850 island-born natives are still alive. However, they and their descendents now number about 7,000. (AFP PHOTO STR
STRINGER / AFP)

(AFP) - The prime minister of Mauritius announced on Monday a "historic visit" by a research vessel to the disputed Chagos Islands, an archipelago it claims in full but which is administered by Britain.

Pravind Jugnauth told reporters that a scientific vessel would set out on Tuesday to the remote islands in the Indian Ocean.

Among those on board will be Chagos islanders forcibly evicted by Britain in the 1960s and 70s to make way for a military base there.

It will be the first time Mauritius has led an expedition to the long-contested islands without requesting permission from the United Kingdom or the United States, the prime minister added.

It follows a 2019 International Court of Justice ruling that backed the claim by Mauritius and said Britain should give up control of the islands.

"It is with great pride that I announce that Mauritius will undertake a trip to the Mauritian territory of the Chagos Archipelago, and in particular to Blenheim Reef, for a scientific study," said Jugnauth.

"This will be a historic visit because it is the first time since Mauritius gained independence on March 12, 1968 that the Mauritian State... is organising a trip to this part of its territory in the middle of the Indian Ocean without having to seek permission from anyone."

The Chagos Islands have been at the centre of a decades-long dispute over Britain's decision to separate them from Mauritius in 1965 and set up a joint military base with the US on Diego Garcia, the largest of the isles.

Both London and Washington had been informed as a courtesy that the mission would be conducting research in the area, but would avoid Diego Garcia, said Jugnauth.

The expedition would leave from the Indian Ocean island nation of Seychelles, he added.

The Mauritian permanent representative to the United Nations would be aboard, along with scientists and the Chagos islanders, he added.

Mauritius has fought since 1975 to return the archipelago to its territory and in 2019, the International Court of Justice ruled that Britain should give up control of the islands.

Later that year, the UN General Assembly overwhelmingly voted in favour of a resolution recognising that "the Chagos Archipelago forms an integral part of the territory of Mauritius" and recommending Britain withdraw within six months.

Britain, some 9,500 kilometres (5,900 miles) to the west from Chagos, insists the islands belong to London and has refused to leave.

It has renewed a lease agreement with the United States to use Diego Garcia until 2036.

Diego Garcia played a strategic role during the Cold War, and then as an airbase, including during the war in Afghanistan.

Mauritius has described their continued presence as "an illegal administration".

Indian Ocean » Be a reporter: Write and send your article » Subscribe for news alert
Tags: Mauritius, Chagos, US, diplomacy, Justice