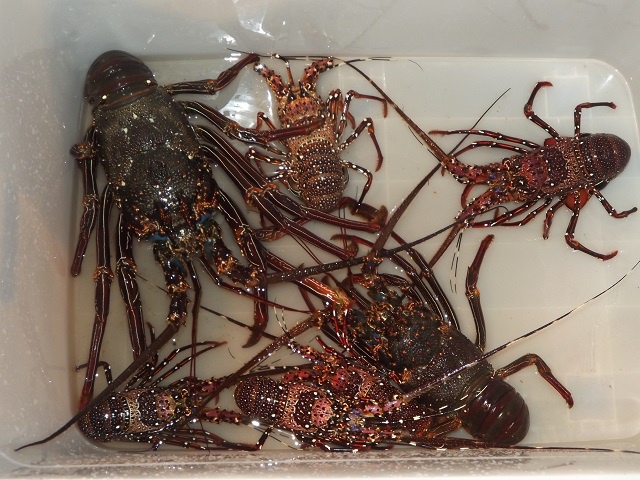 (Seychelles News Agency) - To allow sufficient time for the different lobster species in the Seychelles waters to reproduce and rebuild stocks the Seychelles Fishing Authority (SFA) has announced that there will be no lobster fishing this year during the annual harvesting period which runs from November to January.

Over the last twenty years, lobster fishing has been characterised by alternating patterns of harvesting seasons to allow stocks to repopulate naturally.

However, through constant monitoring, SFA has seen a decreasing stock abundance, necessitating a closure period to rebuild stocks.

According to SFA, for the 2011-2012 lobster season some 3.3 tonnes of the species was caught, 2.1 tonnes was the figure recorded for the 2012-2013 season, but last year only 609 kilograms of lobster was caught as the season was opened for one month only instead of the usual three month period.

SFA’s Senior Fisheries Scientist, Rodney Govinden told SNA in an interview that in 2005 a monitoring programme called the Participatory Lobster Monitoring Programme (PLMP) was developed in collaboration with lobster fishermen.

“The main aim of the programme was to monitor the abundance of lobsters during the closed season and provide indices of the lobster stock. A total of ten sites located along the northwest and western part of Seychelles main island of Mahé were selected for monitoring of lobster stocks,” said Govinden.

In 2013, the programme was reviewed and an additional 10 sites along the western and southern part of Mahé were included in the survey bringing the total number of sites surveyed to 20.

At the same time lobster fishermen are issued with logbooks to collect information on their catches during the open lobster fishing season. In addition, research technicians sample the landed catch to collect weight and length measures.

Information gathered is analyzed after each lobster fishing season.

“The trend in the catch and size of lobsters is compared to the previous fishing season and a decision is taken on whether to open the next lobster fishing season or not,” Govinden said.

Now that it has decided to close the 2014 lobster fishing season SFA will be continuing with its monitoring on the Mahé plateau to establish the abundance and monitor recovery of lobster stock.

Since last year SFA also launched a tagging programme aimed at gathering data that will help to determine the growth rate and movement of lobsters.

Govinden told SNA that based on information gathered through its constant monitoring SFA will consider whether or not the next lobster season should be opened in November 2015.

In Seychelles, lobster fishing is seasonal and licensed with a restriction on the number of licenses issued each year. Govinden told SNA that SFA offers 20 licenses at the beginning of each lobster fishing season.

“We normally get 14 to 15 people who apply for the license,” he added.

Traditionally, the lobster fishing season lasts for three months and is restricted during the northwest monsoon period when the sea is generally calm with the weather being warm and humid.

SFA maintains that lobsters with a carapace length of less than 75mm for all species should not be caught and the fishing of berried females is also prohibited.

In Seychelles, fresh lobsters sell at around $36 (500 Seychelles rupees) per kilo and are mostly purchased by hotels and other tourism catering establishments.