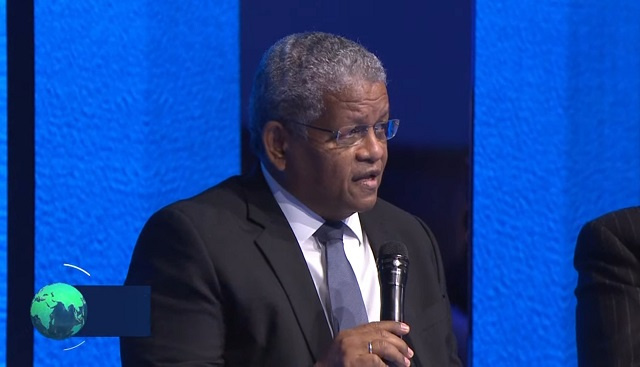 Ramkalawan, who attended the summit at the invitation of the President of France, Emmanuel Macron, made his intervention on Friday. (State House)

(Seychelles News Agency) - Sustainable solutions are needed to address extreme weather conditions and sea-level rise, which threaten livelihoods and survival of low-lying islands, the President of Seychelles, Wavel Ramkawalan, said at the One Ocean Summit taking place in Brest, France.

Ramkalawan, who attended the summit at the invitation of the President of France, Emmanuel Macron, made his intervention on Friday.

A dozen heads of state and representatives of several international organisations attended the summit from February 9 -11, which was opened officially by Macron.

According to State House, Ramkalawan, whose address focused on marine pollution caused by men and the threat of climate change to small island developing states, said that "we have 'One Ocean', which represents the heritage of all humanity and we must give it the respect it deserves."

The head of state of Seychelles, an archipelago in the western Indian Ocean, stressed the importance and significance of strengthening international governance.

"We need a proper international governance structure – one that curbs irresponsible practices and policies that are at the core of a multitude of problems that we face today. From our perspective as a Small Island Developing State (SIDS), global ocean governance initiatives and existing institutions must be strengthened and financial mechanisms need to be leveraged to enhance capacity in developing coastal countries and SIDS to address the sustainable management of the ocean and coasts," he said.

Ramkalawan spoke about Aldabra, one of Seychelles' UNESCO World Heritage sites, where thousands of tonnes of plastic waste are washed ashore annually.

After his intervention, President Ramkalawan gave an interview to TV5 Monde on the plight of SIDS to discuss marine pollution and its threat to the existence of humanity. He urged the international community to take action.

The first 'One Ocean Summit' focused on several initiatives necessary for better governance of the oceans, the protection of marine ecosystems, the fight against pollution, particularly plastic, and the fight against climate change.

Seychelles has earned praise from the international community for designating, under law, 30 percent of its maritime territory as a protected area. Furthermore, the archipelago in the western Indian Ocean is considered a pioneer in the Blue Economy – the sustainable exploitation of ocean resources.

The island nation has undertaken several initiatives in this field including the Debt-to-Adaptation Swap, whereby repayment of an international debt of $21 million was cancelled in exchange for investment in the Blue Economy.