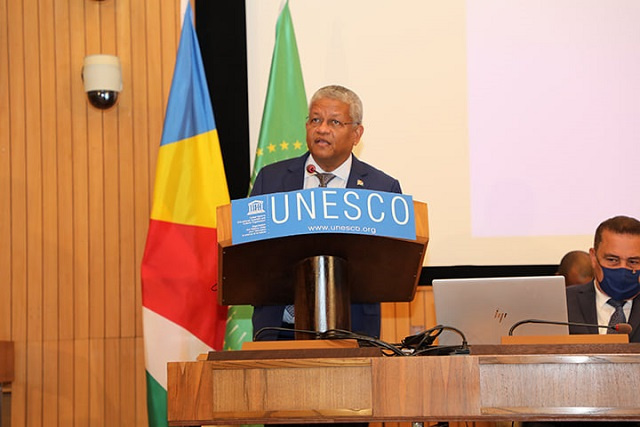 (Seychelles News Agency) - Seychelles' President Wavel Ramkalawan on Monday underlined the importance of UNESCO Africa giving due consideration to the vulnerabilities of small island developing states from the continent.

State House said that Ramkalawan addressed the UNESCO Africa group at the UNESCO headquarters in Paris.

"As representatives of Africa, your group needs to remain active in the discourse taking place in the lab of ideas and the standards-setting body that is UNESCO. We must progress the African agenda by championing our values and knowledge systems. In doing so, we will be contributing to the decolonisation of knowledge and encouraging the emergence of a more equitable world order," said Ramkalawan.

The head of state of Seychelles also talked about the implementation of the UN Decade of Ocean Sciences in Sustainable Development. The Intergovernmental Oceanographic Commission of UNESCO is the designated lead agency for its implementation.

"Global ocean governance initiatives and existing institutions must be strengthened and financial mechanisms need to be leveraged to enhance our capacity to address the sustainable management of our ocean and coasts. The success of the implementation of the Ocean Decade will, in a large measure, depend on you, on tangible commitments from UNESCO's Member States," he added.

Ramkalawan said that her has been invited to become a Patron of the Ocean Decade Alliance set up for that purpose and is counting on their support to enable Seychelles to achieve the ambitions of the alliance as well as the objectives of Agenda 2030.

He thanked UNESCO and representatives of African member states for their support of the nomination of the 'moutya' dance as an intangible cultural heritage of humanity.

Moutya, the traditional dance of Seychelles, an archipelago in the western Indian Ocean, was added to the UNESCO's list of intangible heritage on December 15 last year.

The addition of the Moutya on UNESCO's an intangible heritage list was also the subject of a discussion between Ramkalawan and the UNESCO director general, Audrey Azoulay.

"Seychelles is grateful for all the support UNESCO has extended to us over the years. My country is immensely proud to host two World Heritage Sites -- 'Aldabra and Vallée de Mai -- and one Category II Centre of UNESCO, the Seychelles IECD for Early Childhood Development. We recently also had the 'Moutya Dance' inscribed on the List of Intangible Cultural Heritage of Humanity," he said.

On her part, Azoulay congratulated Seychelles for the achievement it has made in climate change advocacy and reaffirmed UNESCO's commitment to advance priorities of small islands developing states.

New areas for cooperation and how Seychelles can benefit from UNESCO programmes were also discussed.

Ramkalawan also met with representatives of the Small Island Developing States (SIDS) permanent delegations to UNESCO and called on them to keep up the excellent work and to guarantee that UN agencies are kept abreast with the present realities of SIDS.

"We have come a long way. It has been 28 years since the UN organised the first International Conference on SIDS in Barbados. Since then, we have adopted several declarations and plans of action. These have guided our actions and have contributed significantly for us to pave the way to our current position," he said.