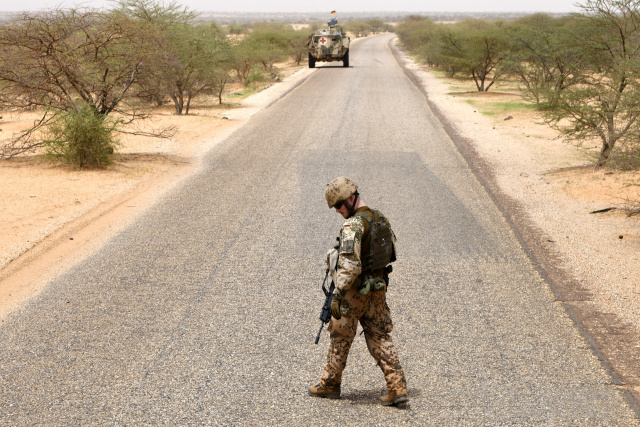 (FILES) This file photo taken on August 2, 2018 shows a German soldier from the parachutists detachment of the MINUSMA (United Nations Multidimensional Integrated Stabilization Mission in Mali) searching for IED (improvised explosive device) during a patrol on the route from Gao to Gossi, Mali. Germany's defence minister said on February 17, 2022 she was "very sceptical" whether Berlin would remain part of a European military training mission in Mali after France said it was withdrawing its troops. "We have taken note of the French decision to leave Mali and end its mission there, which will of course have repercussions for its partners," Christine Lambrecht told reporters. (SEYLLOU / AFP)

(AFP) - France's announcement Thursday that it would withdraw its anti-jihadist force from Mali stirred little emotion in the Sahel state, where some cautiously welcomed the move but others worried for the future.

Many in the capital Bamako listened attentively to the news, which had been expected for days.

But even though many Malians had felt frustration toward France, there were no celebrations.

The former colonial power first intervened in Mali in 2013 after a separatist rebellion in the north of the country gave way to a brutal jihadist insurgency.

But the Islamist conflict spread deeper into Mali, as well as to neighbouring Burkina Faso and Niger, despite the presence of French troops -- feeding popular resentment.

Relations plunged after the military seized power in 2020 and then defied calls to swiftly restore democratic rule.

"Terrorism has spread over practically all of Malian territory," he said. "European forces are here, but what for?"

The idea applies to European countries who have been participating in the so-called Takuba mission of special forces, which is supporting the army, an army statement said.

Macron said the pullout also applies to Takuba, whose forces are led by France.

Many in the streets of Bamako appeared sanguine about the French withdrawal, despite the potential security vacuum the move will create in the impoverished country.

"We'll move on quickly," said Aissata Kone, 28, sitting in a taxi. "We Malians have always managed," she added.

Dramane Konate, a passerby, told AFP the withdrawal "is the best thing for Mali".

But another passerby, Lassana Traore, disagreed. He suggested that the consequences had not been thought out.

Open criticism of Mali's junta is increasingly rare, as the military has ramped up nationalist messaging as its diplomatic disputes have escalated.

It staged nationwide rallies last month in response to economic sanctions imposed on Mali by the Economic Community of West African States (ECOWAS) over delayed elections.

Nouhoum Sarr, a pro-junta member of Mali's interim legislature, told AFP that the French departure is neither a victory for Mali nor a failure for France.

He admitted that it may create a security void but that "our military experts are assessing the situation and Mali will do everything in its power to fill the vacuum, perhaps with the support of other partners."

Even so, there was some reticence in Mali about what the future holds.

Modibo Soumare, the head of a coalition of opposition parties, said the departure will "only affect our people".

"In our culture, we say that when there is a conflict in the family, it is not the time to take your luggage and leave," he said.

Attaye Ag Mohamed, the leader of a former separatist militia that signed a 2015 peace agreement with Bamako, said that to argue the French intervention hadn't helped was "denialism".

He added that the only alternative to French security guarantees was to apply the 2015 Algiers accord, which is meant to decentralise power in the vast and ethnically diverse nation of 21 million.

Analysts view the 2015 Algiers peace accord as one of the few escape routes from Mali's decade-old conflict, but its full implementation has long stalled.

France and its allies have vowed to remain engaged in fighting terror in the Sahel despite leaving Mali.

But in Niger too, the uncertain future provoked mixed reactions.

Maikoul Zodi, a member of a Nigerien civil-society group, said the possibility of French forces moving to Niger could lead to "attacks on our soil".

But Souley Oumarou, head of the Forum for Responsible Citizenship campaign group, warned that the pullout could lead to a "situation of chaos."

"It's flying in the face of reality to think that (national) armed forces (in the Sahel) are able to tackle the security problem" by themselves, he said.