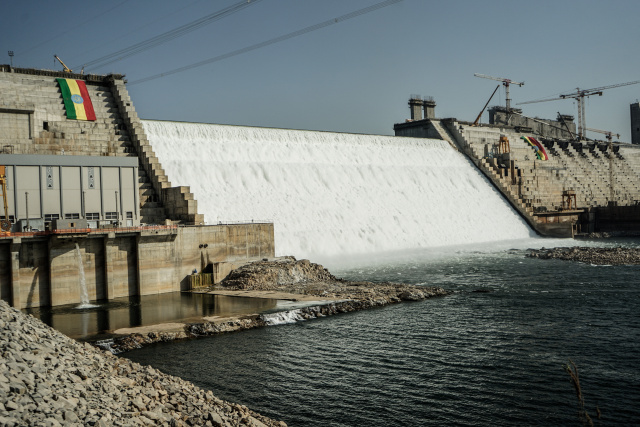 This general view shows the site of the Grand Ethiopian Renaissance Dam (GERD) in Guba, Ethiopia, on February 19, 2022. Ethiopia's massive hydro-electric dam project on a tributary of the Nile has raised regional tensions notably with Egypt, which depends on the huge river for 97 percent of its water supply.
Government officials said the dam would begin producing electricity on Sunday, more than a decade since work first started. (Amanuel SILESHI / AFP)

(AFP) - Ethiopia began generating electricity from its mega-dam on the Blue Nile on Sunday, a milestone in the controversial multi-billion dollar project.

Prime Minister Abiy Ahmed, accompanied by high-ranking officials, toured the power generation station and pressed a series of buttons on an electronic screen, a move that officials said initiated production.

The Grand Ethiopian Renaissance Dam (GERD) is set to be the largest hydroelectric scheme in Africa but has been at the centre of a regional dispute ever since work first began in 2011.

Abiy described Sunday's development as "the birth of a new era".

"This is a good news for our continent & the downstream countries with whom we aspire to work together," he said on Twitter.

Ethiopia's downstream neighbours Egypt and Sudan however view it as a threat because of their dependence on Nile waters, while Addis Ababa deems it essential for its electrification and development.

But Abiy, wearing sunglasses and a khaki-coloured hat emblazoned with the Ethiopian flag as he toured the site, dismissed those concerns.

"As you can see this water will generate energy while flowing as it previously flowed to Sudan and Egypt, unlike the rumours that say the Ethiopian people and government are damming the water to starve Egypt and Sudan," he said as water rushed through the concrete colossus behind him.

"Ethiopia doesn’t have the desire to hurt anybody. Ethiopia’s only desire is to provide electricity to the mothers who have never seen a lightbulb, to alleviate the burdens of those who carry sticks on their backs to generate electricity, and to extricate them from the poverty we’re in currently."

The $4.2-billion (3.7-billion-euro) project is ultimately expected to produce more than 5,000 megawatts of electricity, more than doubling Ethiopia's electricity output.

Only one turbine of 13 turbines is currently operational, with an installed capacity of 375 megawatts.

A second turbine will come online within a few months, project manager Kifle Horo told AFP after the ceremony, adding that the project is currently expected to be fully completed in 2024.

The 145-metre (475-foot) high dam lies on Blue Nile River in the Benishangul-Gumuz region of western Ethiopia, not far from the border with Sudan.

Egypt, which depends on the Nile for about 97 percent of its irrigation and drinking water, sees the dam as an existential threat.

Sudan hopes the project will regulate annual flooding, but fears its own dams could be harmed without agreement on the GERD's operation.

Both countries have been pushing Ethiopia for a binding deal over the filling and operation of the massive dam, but talks under the auspices of the African Union (AU) have failed to reach a breakthrough.

"The newly generated electricity from the GERD could help revive an economy that has been devastated by the combined forces of a deadly war, rising fuel prices and the Covid-19 pandemic," said Addisu Lashitew of the Brookings Institution in Washington.

The dam was initiated under former prime minister Meles Zenawi, the Tigrayan leader who ruled Ethiopia for more than two decades until his death in 2012.

Civil servants contributed one month's salary towards the project in the year of the project launch, and the government has since issued dam bonds targeting Ethiopians at home and abroad.

But officials on Sunday credited Abiy with reviving the dam after what they claim was mismanagement delayed its progress.

"Our country has lost so much because the dam was delayed, especially financially," project manager Kifle said in his remarks at the launch ceremony.

Those in attendance included First Lady Zinash Tayachew, former prime minister Hailemariam Desalegn, the heads of the lower house of parliament and the Supreme Court, regional presidents and government ministers.

The process of filling the GERD's vast reservoir began in 2020, with Ethiopia announcing in July of that year it had hit its target of 4.9 billion cubic metres.

The reservoir’s total capacity is 74 billion cubic metres, and the target for 2021 was to add 13.5 billion.

Last July Ethiopia said it had hit that target, meaning there was enough water to begin producing energy, although some experts had cast doubt on the claims.

Kifle declined to reveal how much water was collected last year or what the target is for the coming rainy season.