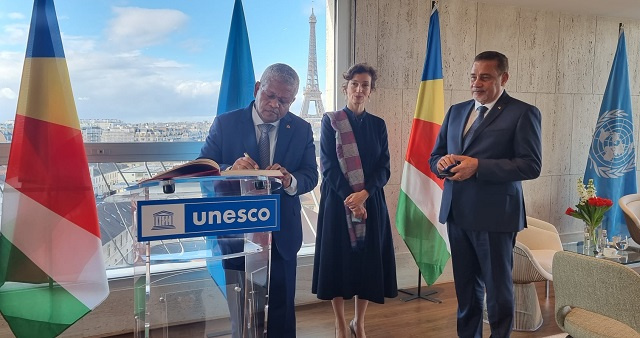 This announcement was made at the One Ocean Summit held last week in Brest, France that Ramkalawan (right) attended at the invitation of UNESCO.

(Seychelles News Agency) - Seychelles has taken another step to reaffirm its contribution to ocean science and leadership among small island developing states with the nomination of President Wavel Ramkalawan as one of the two patrons of the Ocean Decade Alliance.

This announcement was made at the One Ocean Summit held last week in Brest, France that Ramkalawan attended at the invitation of UNESCO.

The other patron of the alliance is the Prime Minister of Norway, Jonas Gahr Støre.

"We believe that ocean science diplomacy has a crucial role in facilitating the science needed to support ocean governance and management at all levels," said Seychelles' President in his acceptance letter.

"UNESCO, especially through the Intergovernmental Oceanographic Commission (IOC), has provided capable and sustained leadership in this and other related areas. Seychelles will continue to provide the IOC-UNESCO with the support that is required in the pursuit of our common endeavour and the implementation of the objectives of the Ocean Decade."

The sustainability of the ocean is at the top of Seychelles' development agenda and is an important part of its diplomatic outreach. This makes the island nation a key actor to mobilise countries from the Indian Ocean and small island developing states to support and contribute to the Ocean Decade.

In March 2020, Seychelles achieved a milestone when it designated one third of its ocean territory as a Marine Protected Area, a total of 410,000 square kilometres, under the National Parks and Nature Conservancy Act.

This is a result of the Seychelles Marine Spatial Plan, an output of the debt-for-nature swap initiative co-designed by the government of Seychelles and The Nature Conservancy.

The new Marine Protected Areas cover more than 30 percent of Seychelles' waters and half of these are of high biodiversity and gazetted as Marine National Parks where almost no human activity other than sustainable tourism will be permitted.

With its President as patron of the Alliance, Seychelles, a group of 115 islands in the western Indian Ocean, becomes an institutional member of the Ocean Decade Alliance.

The nomination of Ramkalawan and Gahr Støre as patrons is a step to generate global support of the UN Decade of Ocean Science for Sustainable Development 2021-2030.

The Alliance's mandate is to accelerate support for the Ocean Decade through targeted resource mobilisation, networking and influence, leveraging and multiplying financial and in-kind resource commitments.

"Ocean-based industries play a crucial role in the Norwegian economy, and Norway attaches great importance to ensuring the sustainable management and use of marine resources," said Prime Minister Gahr Støre.

He added that "as co-chair of the high-level panel for a sustainable ocean economy, l am pleased to see the close alignment between the implementation of the UN Decade and the action agenda of the Ocean Panel. l, therefore, welcome and support the UN Decade of Ocean Science for Sustainable Development.".

The Ocean Decade Alliance will feature prominently at several upcoming global events, including the UN Ocean Conference in Portugal's capital Lisbon in June.