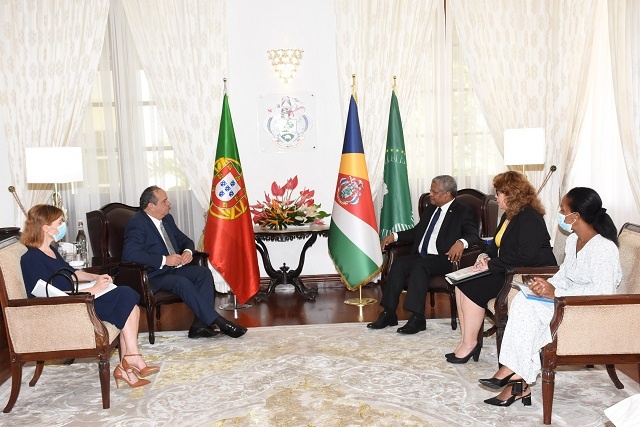 (Seychelles News Agency) - Seychelles and Portugal will share experiences in renewable energy while looking at the blue economy and sustainable tourism as new areas for bilateral cooperation, said the newly accredited Portuguese ambassador.

António Costa Moura presented his credentials to Seychelles' President Wavel Ramkalawan at State House on Tuesday to become the 10th ambassador of Portugal to the archipelago in the western Indian Ocean.

Moura told the press that the two countries are looking for new avenues of cooperation in the fields of blue economy and sustainable tourism as well as renewable energy.

"Seychelles is doing a wonderful and fantastic job in the area of renewable energy. We, in Portugal, are also trying to improve the percentage of renewable energy in the global package of energies, and have already achieved interesting results. We want to share these experiences with Seychelles among other matters of bilateral interest," said Moura.

The new ambassador extended an invitation to Ramkalawan to participate at the highest level in the next United Nations meeting set to take place in Lisbon in June.

He described the event as being at "the top of our common agenda."

Maritime security, mainly the intervention of the EU NAVFOR and Seychelles' strategic position in the region in combating drug trafficking, was also raised during discussions.

Moura described the relationship between the two countries established in August 1976 as "open and stable between two equal sovereign states."

Moura also met with other high-level officials in Seychelles during his visit.

Also calling on the President on Tuesday was the current German Ambassador to Seychelles, Annett Günther.

She described Seychelles as a reliable and strong partner in the international arena, and in the fight for peace and security in the world.

Günther and Ramkalawan expressed their concerns on what is happening in the relations between Russia and Ukraine which she said is a "threat to peace and freedom, not only in that particular region but in the world in general."

When she was accredited as ambassador to Seychelles in 2018, Günther outlined renewable energy, solar technology, and vocational training as her focus during her tenure.

"We have worked on these areas but unfortunately because of COVID none of us were really able to travel around and to bring these topics forward. We took these discussions up again yesterday with the Minister for Youth Sports, and Family, the Ministry for Foreign Affairs yesterday," she said.

Despite not being able to travel to Seychelles during the pandemic, Günther has kept in touch with the authorities and ministries in Seychelles on various issues, such as the upcoming United Nations Environmental Assembly meeting next month in Nairobi.

"The cooperation in the area of climate change and environmental protection between Germany and Seychelles is very strong, with Germany having five projects in Seychelles under the International Climate Initiative. These projects are ongoing, though at a slower pace than expected," said Günther.

She also visited one of the projects under 'Enhancing Coastal and Marine Socio-Ecological Resilience and Biodiversity Conservation' in Seychelles where locals have the chance to play an equal role in decision-making and the management of marine protected areas in the participatory project.